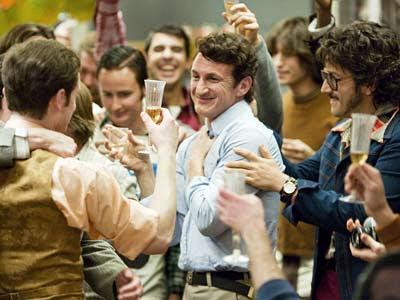 Holiday movie season is upon us. For a cinephile like myself, the onslaught of great (or at least the best the Hollywood studios can pump out every year-end) movie releases makes the earlier sundowns and colder temperatures easier to bear.

I can't wait to see director Gus Van Sant's 'Milk,' with Sean Penn, James Franco and Josh Brolin, chronicling the life of Harvey Milk, the first openly gay man to be elected to public office in California. Milk, along with then-San Francisco mayor George Moscone, were assassinated by fellow politician Dan White a year later, in a case that coined the phrase, 'The Twinkie defense'.

Opening this week,initial reviews have been strong. Already, there is talk that Penn's achievement playing Harvey Milk will land him another Oscar nomination and perhaps his second Best Actor award. But it's early yet and movie awards season is just taking shape.

Milk's arrival on big screens coincides with the aftermath of California's recent passage of Proposition 8. The film, itself, delves into a similar California referendum in 1978 that would've banned gay and lesbian teachers and Milk's efforts to defeat it.

If you don't know much about Harvey Milk, I'd recommend a viewing of the extraordinary 1984 feature documentary, 'The Times of Harvey Milk', which won the Academy Award for best documentary feature.

Please expect a review from me of 'Milk' very soon.
Posted by Matt Guerin at 3:50 PM
Email ThisBlogThis!Share to TwitterShare to FacebookShare to Pinterest

I saw the trailer and it looked riveting. I'm not a big fan of van sant but do think Penn is occasionally capable of magic. And the story/murder of Harvey Milk, when I was a teenager, struck me as very sad.
That being said, most films these days aren't even trying to appeal to my middle-age, old Hollywood taste anymore. This one i wouldn't mind seeing.

saw it yesterday. the audience applauded.