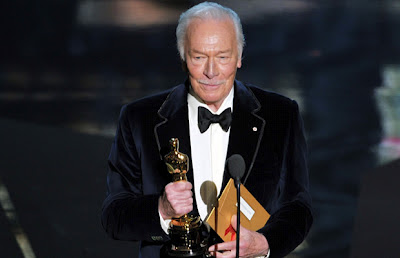 Bravo to a great Canadian actor! Congrats, Mr. Plummer!
Posted by Matt Guerin at 11:44 AM No comments:
Email ThisBlogThis!Share to TwitterShare to FacebookShare to Pinterest

Alberta, why must you always disappoint us?...
Posted by Matt Guerin at 2:37 AM 1 comment:
Email ThisBlogThis!Share to TwitterShare to FacebookShare to Pinterest

It's offensive that Drummond could argue that class sizes should be increased, education workers be fired, and other major cutbacks be endured by all systems rather than address this obvious inequity of funding one religion's public schools, but not others.

I'm sure there were some issues that Drummond was ordered not to even touch (ie. private health care delivery perhaps?) I truly hope he didn't get his marching orders from the McGuinty Liberals to steer clear from taking on the duplication of public school systems in Ontario.
Posted by Matt Guerin at 2:15 PM No comments:
Email ThisBlogThis!Share to TwitterShare to FacebookShare to Pinterest

A political strategy for re-visiting the Catholic school system in Ontario...

Dalton McGuinty's Liberal government has a minority of seats. Re-visiting the Catholic school system isn't something that will likely be contemplated right now with the government's fate hanging in the balance.

But nevertheless this issue screams for action!

This is perhaps Dalton McGuinty's last term as our 'Education Premier' (unless his government falls in the near future and an unexpected election is called.) Who but a Roman Catholic premier could have credibility re-visiting the whole separate school issue? No one could accuse McGuinty of attacking Catholicism or Christianity because he himself is Roman Catholic and his own wife has earned a living teaching in the Catholic system.

But I think something needs to give. It's got to happen eventually. We can't go on publicly funding one religion's schools and not others. Either we spend the additional monies to finance more separate, religious school systems (like John Tory proposed to great disaster in 2007), or we shut down the Catholic and integrate all into one public school system.

Of course, the government can't admit that the status quo (of one public system and one Catholic system) is unacceptable. Catholic school rights were guaranteed at Confederation in 1867. Other provinces have decided to update their outdated laws with regard to religious school systems (Quebec and Newfoundland & Labrador). It's time Ontario joined that club.

Which system to move to? How to decide?

I propose a non-binding plebiscite be held on this matter in the near future. Perhaps a provincial plebiscite corresponding with the 2014 municipal vote would be appropriate? Voters should be given a lot of time to think about the issues and there should be publicly-funded campaigns supporting all three sides equally. I would add if the two sides fighting for religious options (#1 or #2) wanted to work together in one campaign, they could together share 50% of the public funds available, while the side supporting one public system for all could receive the other 50% of public funds. No other monies could be spent by third parties in advance of the vote, only these three or two campaigns would have the power to organize and spend money on the plebiscite campaign. Any vote would have to seem fair in order for the result to be seen as legitimate, and splitting funding in this way would be.

How do you vote on a question with three possible answers and achieve a majority result? Do you hold a run-off at a later date between the top two options, or do you hold an instant run-off so voters only have to head to the polls once.

I would create a ballot in which voters would rank their preferred school system options in order from one to three, with one being their top choice, followed by their second choice and then their third choice.

If one system didn't receive majority support from voters, the option with the least votes would be dropped, and its voters' second preferences factored in. If for example the first vote was the following:

The counters would take the 21% ballots and count their second choices. If you're in favour of keeping just the Catholic board, then you'd likely vote with your second choice for religious schools for all, considering that would allow Catholic schools to remain running. That could lead to a 47% vote for one public board, and 53% in favour of one public board plus religious schools for all, not just Catholic.

Who knows what the result would be? Personally I suspect a big majority would favour one system for all, but Ontarians have surprised me before.

Ontario citizens have never had a chance to express their opinions on the make-up of the publicly funded school system. We inherited our status quo system of one public board and one Catholic board, we never chose it. It's time for Ontarians to be given the chance to express an opinion on this, especially at a time of government restructuring a la Don Drummond.

A preferential, instant runoff ballot would allow for a majority result that is clear.

Why make it unbinding?

Because a binding referendum on the issue would, in truth, be putting minority religious rights up for a vote. So it would keep passions tempered a bit to keep it non-binding. The vote would merely express public will on the make-up of our publicly funded education system.

And as the ballot is designed to get voters to select first, second and third options, they're not really voting rights up or down, they're just ranking preferences.

If a majority of voters picked one system for all, it would give the government a political mandate to re-visit the status quo it currently doesn't have. The McGuinty-ites did not campaign on re-opening the separate school issue in the last election campaign. If this issue is even to be contemplated, the government would need some kind of a mandate to do so. The plebiscite could provide that.

If it's non-binding, and a majority vote to extend public funding to all religions, but current finances show that's impossible with our current deficits, we can hold off. But it can be a long-term goal as Ontarians have clearly voiced a preference.

I propose this because I believe if Ontarians are given the choice, they'll vote for one public system for all, and not to divide our kids up according to religion. I see it as a way to take the issue out of the politicians' hands and put it in the hands of the people.
Posted by Matt Guerin at 9:06 AM 3 comments:
Email ThisBlogThis!Share to TwitterShare to FacebookShare to Pinterest
Newer Posts Older Posts Home
Subscribe to: Posts (Atom)