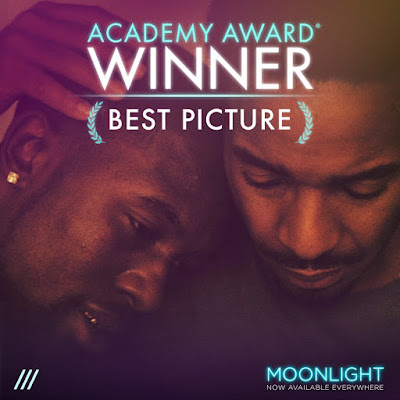 I'll soon buy a copy of this classic film.  Maybe I'll even go see it again in the theatre to celebrate.  If you haven't enjoyed the poetic beauty of Moonlight, I encourage you to do so as soon as possible.
Posted by Matt Guerin at 8:55 AM No comments:
Email ThisBlogThis!Share to TwitterShare to FacebookShare to Pinterest

My short film "Tri-Curious" reaches over 50,000 views on YouTube!

The whole conflict between between traditional, strict monogamy versus more open-minded, experimental relationships intrigues me greatly.

I tried to embed a bit of that conflict in this film with this couple, along with some humour.  It was my first film as director (as well as full-fledged producer, writer and editor.)  I learned much from the experience and I look forward to making many more films.

Tri-Curious played in a handful of film festivals in 2016 and early 2017.  It also got picked up by U.S.-based, LGBT-focused streaming service Dekkoo.

But it was always my plan to put it on YouTube for the wider world to see it for free.   I posted it on January 30th and I'm proud to say that it's garnered over 50,000 views since then, and counting.

Please check it out and let me know your thoughts, either here or on the YouTube page itself.   I hope you enjoy it!

And remember: if you want to get into movies as an artist, learn the craft and start making them yourself!
Posted by Matt Guerin at 3:20 PM No comments:
Email ThisBlogThis!Share to TwitterShare to FacebookShare to Pinterest
Newer Posts Older Posts Home
Subscribe to: Posts (Atom)