Persichilli shows his Tory feathers as he joins Harper's PMO...

I've always thought I was reading conservative spin when reading Angelo Persichilli's columns over the years. His analysis always reserved the most scrutiny and hostility for Liberal subjects. Rarely did he point a critical eye at Stephen Harper or other Conservatives. Now his Tory credentials are confirmed.

Lessons learned: if the so-called fair-minded journalist sounds like a Tory duck, looks like Tory duck, quacks like a Tory duck, he's a Tory (and a duck!)
Posted by Matt Guerin at 12:37 PM 2 comments:
Email ThisBlogThis!Share to TwitterShare to FacebookShare to Pinterest

Today, the country said goodbye to a great leader and hero. Thanks to Jack for everything he did for our country, for the issues he championed, for the battles he fought! May we try to move forward truly inspired by your great example.

I'm happy to share the sublime words of Stephen Lewis, who eulogized Jack at today's funeral. I especially loved the moment when he stated: "[Jack's final] letter was, at its heart, a manifesto for social democracy..." In the audience, all stood and applauded, including Conservative Prime Minister Stephen Harper (minus the applauding).

Yes Jack did unite Canada!
Posted by Matt Guerin at 10:41 PM 1 comment:
Email ThisBlogThis!Share to TwitterShare to FacebookShare to Pinterest

Federal NDP and federal Liberals must unite into one progressive national party...

TheStar NDP will need growth outside its Quebec base

On this issue, I'm sure I will anger many diehards in both the NDP and the Liberals. But as a post-partisan progressive (both a former card-carrying Liberal and a frequent NDP voter), the coming together of the federal NDP and federal Liberals is absolutely necessary if the progressive MAJORITY in this country is going to beat the Conservatives over the long-term.

Divided between a left-wing NDP and a centre-left Liberal Party, the progressive majority will always find it difficult to beat the Conservatives. Unhelpful, historic bickering and partisan hang-ups need to be dispensed in favour of the greater good.

Now that the NDP is facing another existential crisis with the passing of Jack Layton, it's as good a time as any to make the plea. It's time for the NDP and the Liberals to unite into one national party. It should be called the 'New Liberal Democratic Party', or NLDP for short.

Consider the arguments in today's column by Chantal Hebert:

"Unless the NDP rises to the challenge of convincing more Canadians outside Quebec that it is a contender for federal power, its support in the province will dwindle fast. And at some point, the party will also need to get its head around its relationship with the still very much alive Liberals....

"A majority of Quebecers also support a rapprochement between the Liberals and the NDP.

"The notion of a coming-together of their two parties is heresy to many Liberal and New Democrat activists in the rest of the country. Whenever the issue is raised, they point to their strikingly different pasts to foreclose the option of a common future.

"But against the seismic realignment that is ongoing in Quebec, that argument comes across as empty.

"These days, some of the Liberals and Bloc Québécois incumbents who were defeated in the last federal election are considering running provincially under the banner of the new party former PQ minister François Legault is trying to get off the ground.

"If a Quebec tent is large enough to shelter people who hail from such irreconcilable sides in the so-called national debate, the thinking — at least in Quebec — is that there should be a progressive tent sturdy enough to accommodate the NDP and the Liberals federally."

Under new, unseasoned leadership, the federal NDP will likely only pose a token threat to the Conservatives federally. Alone, those diehard Liberals may be able to increase their vote by a couple of percentage points if they're lucky. But the splits could actually mean fewer Liberal MPs, not more. The result: Conservative majority after Conservative majority federally. That would be disastrous for Canada.

The removal of public financing for parties will also make it next to impossible for both the NDP and Liberals to properly finance national campaigns that can compete against the Conservatives.

Alone, the Liberals are dead in most of Quebec, as well as most of Western Canada. The federal Liberals are no longer a national party. The NDP has a new foothold in Quebec that could easily dissolve, but also stronger pockets of support in the rest of Canada. But still the NDP, with its massive baggage, particularly in Ontario, faces hurdles that it may never overcome on its own.

Both brands need fixing. The best way to do it is to bring the best of both parties into one big tent. The federal Liberals can overcome their history of scandal by starting fresh in a new party. The NDP can gain critical credibility on the economy by embracing Liberals with their stronger records of fiscal and economic management. The result would be a highly credible alternative to the Conservatives capable of winning in every region of this country. Over the long term, such a new party would regularly beat the Conservatives.

Harper is counting on continued division in his opposition. He needs to be foiled. Those opposed to the Conservative agenda of Harper and others need to do the right thing. We need one centre-left party in Ottawa now!

p.s. The Economist also sees the value in such a merger.
Posted by Matt Guerin at 1:25 PM No comments:
Email ThisBlogThis!Share to TwitterShare to FacebookShare to Pinterest 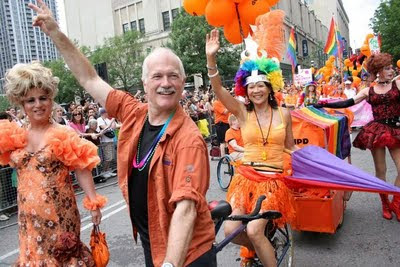 Let me add my voice to the chorus of sadness and praise for Jack Layton, who lost his battle with cancer today.

Jack was a champion of the little guy who fought his entire adult life for a better Canada for all. He was an unwavering supporter of gays and lesbians, something for which I will always be grateful.

I briefly met Jack once in the 1990s at some municipal conference at a Toronto hotel. (I can't honestly remember the details of the event, only Jack's friendly smile as he said, "Hello," to me, a total stranger, at the coffee table.) He was that kind of guy, as we all know, always willing to positively engage his fellow citizens. He was a leader like Canada had never seen before and he transformed modern politics for the better. His legacy is clear and now I hope the NDP can keep up Jack's momentum. I bet you they will be able to do so.

But in the mean time, this is a very sad day for Canada.

But even in death, Jack is inspiring. Some words from his final letter to Canadians prove it: "My friends, love is better than anger. Hope is better than fear. Optimism is better than despair. So let us be loving, hopeful and optimistic. And we'll change the world..."
Posted by Matt Guerin at 5:23 PM No comments:
Email ThisBlogThis!Share to TwitterShare to FacebookShare to Pinterest

When Rob Ford lied about his drunk driving charge, did you really think he was telling the truth about his fiscal plan?

TheStar Ford poised to break promise of no layoffs

Rob Ford is a habitual liar. Everything that comes out of his mouth is either a complete fabrication or so twisted from reality it's hardly recognizable. The city's labour takes up 48% of the annual budget? Rob Ford says it's 80%. And the dummies in Ford Nation believe their big, fat, lying leader.

When Rob Ford was asked last summer about his 1999 arrest in Florida for drunk driving and marijuana possession, he lied to the media about it. He lied his fat, White trash face off about it. Only when he got caught, did he confess his guilt.

“I will assure you that services will not be cut, guaranteed,” he said on Oct. 8, two weeks before winning election. Yeah, right...

Next time you hear Rob Ford say anything, remember his record of lies and fabrications. Nothing he says is true.
Posted by Matt Guerin at 12:00 PM No comments:
Email ThisBlogThis!Share to TwitterShare to FacebookShare to Pinterest
Newer Posts Older Posts Home
Subscribe to: Posts (Atom)