I had the chance to see 'The Judas Kiss' by playwright David Hare now on stage at Toronto's Mirvish Theatre on Good Friday night.

Opening on March 22, it turned out to be the perfect week to see it due to the play's references to the infamous kiss of betrayal by Judas of Jesus Christ according to Christian folklore.

Directed by Neil Armfield, this critically acclaimed production arrives in Toronto after a sold-out run in London’s West End.  It'll move on to New York with this cast in May.

Originally staged in the 1990s, the play highlights two key days in the life of Oscar Wilde, played by Everett, first before his arrest and incarceration for 'gross indecency', and two years later in Italy where Wilde, out of prison, has ventured to reunite with his lover, Lord Alfred Douglas (or Bosie, as he's known), played by the beautiful Charlie Rowe.

Act One focuses mainly on Wilde's dilemma to either flee England and incarceration, or to take Bosie's foolish advice to fight the charges and perhaps see more of his young lover.

Why the ever romantic Wilde would choose to stay on a course towards self-destruction remains the play's central question.  It's answered in the same convoluted way the original decision was probably made by Wilde himself.

Everett gives an astonishing performance as Oscar Wilde, owning the stage from the moment he appears until its last moments at the end of Act Two.   The supporting roles are also played exceptionally well, including by Cal McAninch as Wilde's longtime friend and former lover Robbie Ross, and Rowe as the petulant, selfish and naive Bosie.

It was interesting to see Rowe, only 19, play such a role so convincingly without making Bosie seem completely unsympathetic.  At face value, his character's actions are terrible, selfishly leading to the downfall of a great artist, someone he claimed to love.  The real Bosie seems like the perfect example of undeserving upper class nobility.

In other portraits of this infamous gay couple, Bosie has often come across as completely detestable, making Wilde's ongoing affections seem insane.  In this portrait, one can still see the affection and connection between the two men and why Wilde might find some peace and happiness in Bosie's arms.

The portrait of the foolish older gay man throwing his life away for a beautiful youth is perhaps one of the oldest tropes in gay male culture.  It mimics the similar, misogynistic trope of a powerful, older straight man whose affections for a younger femme fatale prove his undoing.

Indeed, the coupling of Oscar and Bosie may be the most famous example of this trope in modern gay culture, hence why that relationship continues to fascinate.  But ultimately, this is yet another example of an unhealthy gay male relationship, which is unfortunate as this seems to be how most gay relationships continue to be portrayed, even in art created by gay men.   If our relationships aren't depicted as negative, typically they're depicted as comical and clownish, like Mitch and Cam on 'Modern Family.'   It's rare that we see in art a healthy gay couple whose relationship happens to be incidental.

As a filmmaker, I will say one of my hopes is to broaden the portrait of gay male relationships beyond this largely negative or silly portrayal and instead show the truth: gay men can and do form healthy, long-lasting relationships.

Be warned, 'The Judas Kiss' contains full nudity by four of its actors, three male and one female.   Indeed, the nudity by the three young men, including Rowe, added a particularly welcome spice to the proceedings for me and wasn't gratuitous as it complemented the play's themes of repression, naked emotion and betrayal.

Overall, I quite enjoyed it.  'The Judas Kiss' is a great work that deserves to be seen.

Posted by Matt Guerin at 1:57 PM No comments:
Email ThisBlogThis!Share to TwitterShare to FacebookShare to Pinterest

The depressing death of a dangerously reckless and bigoted man: Rob Ford dies 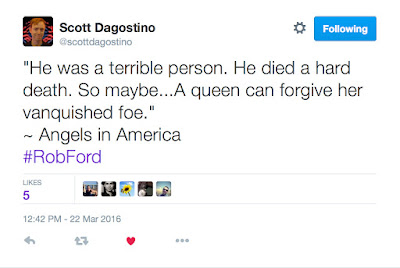 As anyone who's read this blog since 2010 knows, I always hated Rob Ford.

I hated his bigotry and his simple-minded ideology of privilege masquerading as "man of the people" populism.

Rob Ford divided the City of Toronto in life, so it's not surprising that he's dividing it in his death.

Death by cancer is horrible.  Death at the young age of 46 is also horrible.

Rob Ford was robbed today of life.  His family, including his young children, are also terribly robbed of him, assuming of course their relationships with him were healthy and loving.

I can't even write a sentence proclaiming my sympathy for his wife and kids without adding the caveat that I hope his death doesn't represent the end of rumoured abuse.

Such is the enigma of Rob Ford.

As a progressive who abhorred all of Rob Ford's politics and was horrified when he won the 2010 mayoral election, it seems impossible to reflect on this moment today without being torn.

I want to show respect for the dead and sympathy to the family.  They are hurting right now.

But my respect and sympathy sort of ends there.  There are, no doubt, thousands of Torontonians who are also mourning his death.   Just check out Twitter for examples or read Sun Media for their pathetic coverage as they attack lefties for politicizing his death while they do exactly the same thing.

Rob Ford was no man of the people.   Rob Ford was a man out for himself who loved the retail side of politics and little else.  His whole political schtick was a fraud.  He'd show up at the apartment complexes of constituents in the inner suburbs, flash his card, pretend to listen and connect, winning many fans among the ignorant, but then head downtown to attack their interests with his votes and actions.

Many things tied together Ford Nation support behind the Ford brothers, including a truly disgusting and calculated level of homophobia, expressed through both actions and inactions, including refusing to show up at Pride Day every year he was mayor.

He spent a career attacking the rights of cyclists, spreading disrespect and promoting a sense of entitlement among motorists, which I still see often as I cycle to and from work everyday.

On cyclists' safety, Ford infamously said this: "Roads are built for buses, cars, and trucks. My heart bleeds when someone gets killed, but it's their own fault at the end of the day."

His fans now calling him a man of the people are simply indulging in their privilege being part of Ford Nation.  I can imagine how one could think him lovable if one had never faced his irrational and ignorant hatred.

There are some who today said that Karma finally did him in.  After causing so much pain to so many people, including humiliating his city on the international stage with his outlandish behaviour, he refused to admit any wrongdoing and never suffered political consequences for his actions.  He filled his body with no end of garbage, from unhealthy foods, to booze, to hard drugs.

I don't believe Karma did him in.  Plain old nature did.  You can't recklessly abuse a body for that long and not shorten your own life.  Combined with his own behaviour, Ford's family history of cancer did the rest.

It's all sad and pathetic.  Of course, no person is entirely terrible.  He must've had his good sides.  There was something endearing about his goofy realness.  I hope his soul finds peace and understanding that eluded him in life.  The saddest thing about this is, dying at the age of 46, merely two years after his reign of error ended, Ford has had no time to redeem himself or learn the error of his ways.  His life is cut short.  He's been robbed.  That's tragic.

Can I forgive Rob Ford for what he did to my city and move on?  I'll sure try.

I take inspiration from one good friend who tweeted today, quoting Tony Kushner:  "He was a terrible person. He died a hard death. So maybe...A queen can forgive her vanquished foe. It isn’t easy, it doesn’t count if it’s easy, it’s the hardest thing. Forgiveness. Which is maybe where love and justice finally meet.  Peace, at least."
Posted by Matt Guerin at 10:18 PM No comments:
Email ThisBlogThis!Share to TwitterShare to FacebookShare to Pinterest
Newer Posts Older Posts Home
Subscribe to: Posts (Atom)