A quick note of congratulations must go to Chrystia Freeland, who was elected today as the federal Liberal candidate in Toronto Centre for the upcoming by-election. I was at the meeting and happy to give her my first-preference support.

I wasn't able to stick around for the results announcement but got the word of Freeland's victory from Twitter and later the media. Freeland and her crew of supporters are no doubt enjoying some beverages as they celebrate this nice victory. And I agree with what she reportedly told them: the hard work starts now.

I also want to congratulate runners-up Todd Ross and Diana Burke for their hard-fought campaigns. Depending on how this by-election goes, I'm hoping that both of them consider running again for the Liberals, perhaps in one of the new ridings that will be carved out of the existing Toronto Centre riding.

I look forward to working on the by-election campaign and knocking on doors to introduce Freeland to more residents of Toronto Centre and help communicate her message that we need to do more in this country to address income and economic inequality and to help ensure the middle class can once again thrive and succeed. As many of us in the middle class know too well, we continue to see our incomes stagnate or rise much slower than the cost of inflation. Stephen Harper's response to this?: raise our payroll taxes even more while giving big corporations tax cuts that don't need them.

I am thankful that Justin Trudeau and the Liberals are promising to focus on the needs of the middle class as we figure out how to get Canada's economy thriving again. I'll be working hard along with many others to elect Freeland to Ottawa so that she can be a part of that federal Liberal team as it develops those very policies to push Canada forward.

I should also congratulate Linda McQuaig, who was chosen this afternoon to carry the NDP banner in the upcoming by-election in Toronto Centre. We can delve more deeply into some of McQuaig's strange and extreme statements in the past on various issues at a later time.

But for today, we can simply look forward to an interesting contest as voters in Toronto Centre get an opportunity to send to Ottawa a thoughtful, brilliant, idealistic, energetic, international affairs expert in Chrystia Freeland who is running for politics for all the right reasons.

Below is a video put together by the Freeland campaign that played just before her speech this morning. You might recognize one of the speakers, I'm proud to say!

Posted by Matt Guerin at 8:19 PM No comments:
Email ThisBlogThis!Share to TwitterShare to FacebookShare to Pinterest

After missing since Monday, 39-year-old Christopher Peloso, the husband of former Toronto Centre Liberal MPP George Smitherman, was located today by police, dirty and disheveled in the Lansdowne Ave. and Dupont St. area, just after 11 a.m.

I want to express my best wishes to Christopher, George and their family at this time as they move forward with their lives. I also hope the public and the media give them the dignity and respect they deserve.

"The path forward isn’t firmly clear except that we know that it’s long and it will be hard," said Smitherman today at a press conference.

“(Christopher) and me and our family and our kids especially will be surrounded by an outpouring of love and they will restore anybody’s faith and confidence,” said Smitherman.

I want to commend the media, particularly Xtra, for their coverage of this story.

Posted by Matt Guerin at 11:56 PM No comments:
Email ThisBlogThis!Share to TwitterShare to FacebookShare to Pinterest

LGBTQ Rights activists rally around the world against ignorant laws 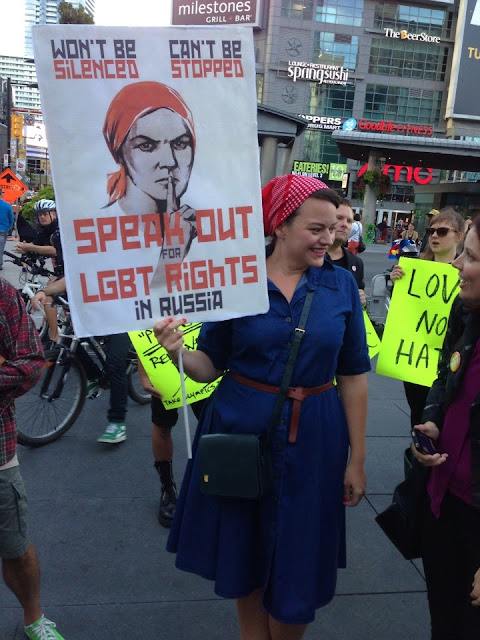 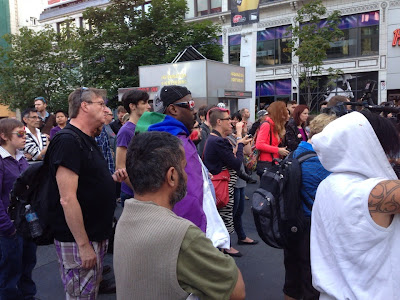 About 100 people turned up this evening in Toronto's Yonge-Dundas Square (pictured above and below) to rally and show support for their fellow queers in other countries. I was glad to be among them. The most touching moments were hearing letters of thanks from LGBT activists in Russia and elsewhere where they live in fear of being targeted by anti-gay laws and rampant homophobia and violence. 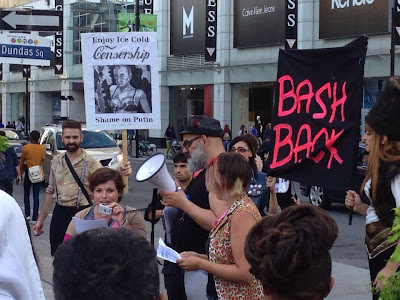 Once the rally took place, the group marched down Yonge Street briefly stopping traffic en route to the TIFF Bell Lightbox building at King and John in downtown Toronto to send a message during Toronto's high profile international film festival. (A sore foot made it impossible for me to join them on the march tonight, but I was there in spirit.)

The struggle continues but these types of public protests against ignorance send the right message both in our own country and across the world.

Posted by Matt Guerin at 10:24 PM No comments:
Email ThisBlogThis!Share to TwitterShare to FacebookShare to Pinterest

The heartwarming story of Wren Kauffman 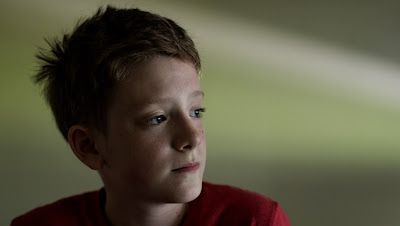 I have been delighted this week to read about the story of Wren Kauffman, an 11-year-old Edmonton boy who went back to school this week like most kids his age. The amazing part of this story is that Wren returned to school after he had been known as a girl named Wrenna. This school year marked the end of hiding for him.

As this Huffington Post article indicates: "Teachers, friends and other students at his Edmonton school know the truth — that he's a girl on the outside but feels like a boy on the inside. And that's why, even at such a young age, he has chosen to live in the world as the opposite sex, and not keep it a secret.

"If you're not yourself, then it kind of gets sad and depressing," says the freckle-faced kid with short-cropped hair.

"I'm glad that I told everybody."

Click on this link to watch a great Canadian Press video of Wren in his own words. Unfortunately I can't embed it here on this site.

What a beautiful kid! I'm so proud of him and his family for supporting him in this amazing decision.

The story also reminds me of a dear friend, Kyle Scanlon, who was also transgendered and often told me how he felt quite awkward while growing up. Born female with the name 'Kelly', Kyle said he too looked at himself as a boy, not a girl while growing up. The onset of puberty and its hormonal changes brought on a deep depression that lasted for Kyle for years. Only later as an adult (a couple years after I met him) was Kyle able to undergo gender re-assignment surgery and finally become the man he was meant to be.

Sadly, even this transformation didn't help Kyle handle all of his personal demons and he chose to end his own life in 2012. So watching this story this week about this amazing 11-year-old boy who has support from his family, his classmates and his school to come out as transgendered provides some great relief and hope.

If indeed school boards across Canada are starting to work out how to accommodate and support transgendered students (and make no mistake, there are many such students struggling in our schools right now), then that is a fantastic thing and most needed!