As many know, on top of my political inclinations, I'm also a filmmaker on the side.

A great group of friends and colleagues helped me make it, along with actors Trevor Ketcheson, Rob Salerno and Mike Went.  I worked so hard on it and I continue to be immensely proud of our efforts.

The short went on to get programmed in 2016 and 2017 at various film festivals around the world (but sadly not in Toronto) and even got picked up by LGBT-themed video-on-demand site Dekkoo. 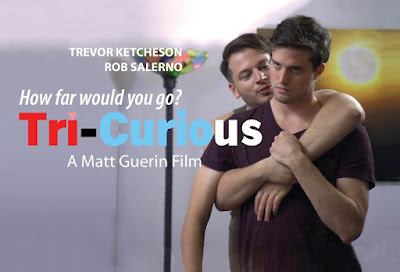 On top of that, I put the film on YouTube where it garnered an incredible 1.5 million views in 10 months!  It's no longer available on YouTube as I've now sold the exclusive distribution rights for five years to Dekkoo (which is associated with LGBT film distributor TLA Releasing).

The result is their upcoming DVD release, CAS, a collection of three films that examine the different effects the addition of a third party has on a modern gay relationship.

The DVD gets released on April 21, 2018 and is available now for pre-order at this link.

Tri-Curious will be tucked in between the 50-minute Dutch TV short Cas, by director Joris van den Berg, and the U.S. short Bed Buddies, by director Reid Waterer.  I'm thrilled!!


If you'd like to check out my film and also get two other great shorts thrown in, please consider buying the DVD for your collection.  You can also see my short right now if you wish by clicking on this Dekkoo VOD link and starting a trial membership.
Posted by Matt Guerin at 8:39 AM No comments:
Email ThisBlogThis!Share to TwitterShare to FacebookShare to Pinterest

POLLSTER BOMBSHELL: "I pulled this one out of my ass."

In an exclusive interview with Queer-liberal (exclusive because the short attention spans of other Queen's Park reporters caused them to sashay away after the question was asked), pollster Lorne Bozinoff of Forum Research now admits his most recent poll is bogus, part of a grand experiment to gauge media group think and take us all for a wild ride.

Despite his latest poll "findings" this week which showed overwhelming opposition (44%) or uncertainty/indifference (32%), and only 24% support for this week's Ontario Liberal budget, I asked him how could his latest poll show a sudden "rebound" in Liberal support (up from 23% to 29%) accompanied by the headline, "Budget a Lifeline for Ontario Liberals"?

At first, Bozinoff demurred, grinning like a Cheshire cat.  So I continued: His poll even claimed that "45%" of Ontarians said the budget would make them less likely to vote Liberal, while another "25%" of Ontarians said it would have no impact on their voting intentions.  Only "18%" said it would make them more likely to vote Liberal.

Yet Forum was prepared to stand by its headline, 'Budget a Lifeline for Ontario Liberals?" I asked.

"To be honest, I pulled this one out of my ass," said Bozinoff.  "I've been doing it for years just to cause a stir or grab a quick headline.  News media editors are mostly man boys who hate real issues but are obsessed with horse races, and my polls are like crack cocaine for them.  So I give them what they want and they've been eating it up!"

"I wanted to test this week how much I could manipulate them with a headline that's completely not backed up by the very numbers I'm putting out and they bought it hook, line, and sinker," says Bozinoff.  "Now the headline is out there that Wynne's budget has caused a rebound in Liberal support!"

In the past, Bozinoff has claimed publicly his poll methodologies and numbers are sound.  But he didn't tell the whole story, he now admits.

"In 2015, just for kicks, me and the Mainstreet dude decided we're going to try to push a new narrative and convince everyone that Kathleen Wynne is toxic and dead in the water.  Since then, every single one of my polls has shown her less popular than Hitler among voters.  And now you can really see the fruits of our labour.  Every journalist in Ontario now takes it as a given that she's dead in the water and headed for certain defeat.  Even up against Doug Ford."

"In the past, I've released numbers that say Ontario Liberal support has collapsed to the mid-teens for no reason and published the headline: 'Wynne is dead woman walking'.  Then the next month, I'll put out new numbers showing her back up ten points despite having been hit by some controversy, just to fuck with the media and the public.  It's fun.  There's no rhyme or reason.  I'm just being a prick."

One strategy he's adopted to disguise all this is to use "corrective poll averaging," he said.

"If the rest of the polls out there are starting to show a pretty significant trend, quite out of line with the polls I've pulled out of my ass for fun, wham, my next set of numbers suddenly align with that poll average, and there you have it, I can claim I was right all along, I picked up on a trend and then picked up on a new trend, and boom, I'm right.   It's been working for years, fooling the media and the public.  They are a bunch of fools, and it doesn't have to be April 1st for that to be true!"

"Oh come on, Lorne, you're just shitting me, aren't you?" I finally ask.

"Happy Easter," he says as he backs away, winking.  "Easter hasn't fallen on April Fools Day in years, so this is pretty special."

I shake my head.
Posted by Matt Guerin at 12:43 PM No comments:
Email ThisBlogThis!Share to TwitterShare to FacebookShare to Pinterest
Newer Posts Older Posts Home
Subscribe to: Posts (Atom)