I am so glad to see 'Movember' come to an end. Yes, raising awareness and funds in the fight against prostate cancer is a great cause and I'm glad they raised so much of it in Canada and elsewhere this month.

The problem with 'Movember', at least for me, is it encourages men to grow disgusting and outdated facial hair. Let me be clear about my own personal bias: I hate facial hair on men. I've been known to utter, 'Facial hair is for the Taliban,' as a means to demonize the practice and encourage progressive males to give up growing it.

As most women and gay men already know, facial hair is painful on the fair cheeks of loved ones forced to kiss or get close with men who choose to grow beards or moustaches or what have you. If facial hair isn't grating on your skin, it's getting stuck between your teeth. Gross.

The ugliness of moustaches continues to be lost on many men. Take Justin Trudeau for example, one of the more high profile Canadians to grow a moustache this month. He told CBC News he plans to keep the moustache he grew for Movember until the New Year: "I'm quite attached to it, and more importantly, my wife doesn't mind it to a most heinous degree...So I think we're doing OK."

She doesn't mind it to a 'most heinous degree'? So you're okay with keeping it. Typical straight male response: I like it, you hate it, it stays.

I think women need to respond to this bizarre campaign with a new, equally inconsiderate campaign of their own. How about a new campaign next November to coincide with 'Movember' to raise awareness and funds for a cancer that affects only women?

I offer you my proposal for such a campaign: 'Absta-vember'. Next November, women everywhere should raise awareness and funds to help in the fight against cervical cancer by abstaining from sexual relations for the entire month. Extra points should be given to those women who have male partners who are participating in growing gross moustaches as part of Movember.

The more I think of it, the more brilliant it sounds: 'Absta-vember'. I am only half-kidding. I'm not about to launch such a campaign, but merely write about it here to (1) send the message that the main exercise of growing moustaches, even for good causes, is gross, and (2) perhaps inspire women out there to respond in kind.

Although these women already seem to have picked up on a similar idea.

Moustaches are gross. Goodbye, Movember!
Posted by Matt Guerin at 6:10 PM No comments:
Email ThisBlogThis!Share to TwitterShare to FacebookShare to Pinterest


This is a great 'It Gets Better' video by Ontario Premier Dalton McGuinty, proving yet again he's the right person for the job as leader of this great, dynamic and diverse province.

It's nice to have a premier who stands up for all students and is willing to take action in government to make our schools safer places. I support any government actions that make it harder for bullies to carry on their evil deeds in our schools. This proposed bill is a step in the right direction.

Today, I remain as ecstatic as ever that Ontario dodged the disgusting conservative triumvirate by re-electing an enlightened, visionary and progressive Liberal government in October. I dread to imagine the kinds of destruction that Tim Hudak and his regressive Conservatives would be plotting for our schools were he to have somehow won the recent Ontario election. Hudak would be looking to find ways to ban the mention of homosexuality in our schools, perhaps. He pandered to homophobia during the election campaign, claiming any attempts to make our schools safer for gay kids was somehow an attack on parents' rights. Get used to opposition, Timmy.

Thank you, Dalton, for your leadership. Now I hope you take this further and crack down on Catholic school boards that cater to bullies and bigots by banning gay-straight alliances. We need to do more than promise, 'It gets better.' We need to make it better and ensuring students who want to form gay-straight alliances can do so in all of Ontario's publicly-funded schools would be a good, fair and wise move.
Posted by Matt Guerin at 12:03 PM 1 comment:
Email ThisBlogThis!Share to TwitterShare to FacebookShare to Pinterest

Despite his previous attacks on Nelson Mandela and longtime moronic behaviour, Tory MP Rob Anders has been continually protected by the central Tory brass around Stephen Harper from ever being challenged for his free ticket to Parliament from Calgary West, despite numerous attempts over the years to elect somebody qualified to be a Member of Parliament for the area.

Falling asleep in Parliament? The fact he couldn't get a bit excited by a Tory colleague speaking live directly in front of him (thereby guaranteeing he was on camera) speaks volumes. Yet, I'm sure that Harper will fight tooth and nail to make sure Anders gets acclaimed again for the Tory nomination in his riding. Will voters in Calgary West approve? Probably, since they keep electing the moron by massive margins every chance they get.

Sophisticated democracies throw out bums like Anders, not re-elect them five times! Until Rob Anders goes down to the defeat he deserves for being the most useless MP in Canada, I'm afraid Calgary and Alberta will continue to be seen by folks like me as still very much a backwater of unenlightened rednecks, no matter what Premier Alison Redford says.
Posted by Matt Guerin at 12:16 PM No comments:
Email ThisBlogThis!Share to TwitterShare to FacebookShare to Pinterest

I'm very glad to read that the Toronto District School Board is trying to hold PC Leader Tim Hudak accountable for his party's disgusting, misleading and ‘homophobic’ flyer published during the recent Ontario election campaign.

I blogged about this when the story broke and you can link here to see the original attack flyer, which insinuated that a locally-drafted Toronto school board policy designed to assist teachers to fight homophobia and promote safety in schools was something quite different. Hudak defended the homophobic flyers, thus confirming with many mainstream voters in Ontario he was not ready for prime time.

Keep this issue alive, I say. And make the untalented Mr. Hudak squirm a bit longer.
Posted by Matt Guerin at 9:51 PM No comments:
Email ThisBlogThis!Share to TwitterShare to FacebookShare to Pinterest 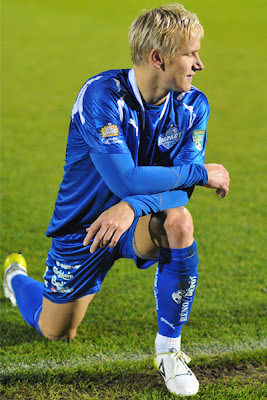 I love it when this happens. Not only does the LGBT community get to shatter some stereotypes about athletes, we also get a new and VERY HOT hero!

David Testo, a 30-year-old midfielder who played for the Montreal Impact and Vancouver Whitecaps FC, revealed in a Radio-Canada broadcast Thursday morning that he is gay.

In an interview with The Globe and Mail, the North Carolina native said that he is going public because of a recent string of suicides among gay teenagers, including Ottawa’s Jamie Hubley, an openly gay figure skater who was bullied at school.

“We have to change, and it’s always been my philosophy that you have to lead the change you want to see,” Testo said. “I felt like it was almost my duty to say that this is okay.”

Thanks, David, for this great move and congrats! And if you are ever in Toronto and get lonely, you can always get in touch with me! ;-)
Posted by Matt Guerin at 9:29 PM No comments:
Email ThisBlogThis!Share to TwitterShare to FacebookShare to Pinterest

This week's tragic death of cyclist Jenna Morrison, a pregnant, 38-year-old mother and wife, in Toronto's west-end has really hit home for me. Morrison died at the corner of Sterling Road while turning west on her bicycle onto Dundas, a turn I also make on a regular basis on my bicycle as I live in the very same area. She was clipped by a truck as both made a right turn and she was pushed under the back wheels and died. Police are still investigating and charges may still be laid against the truck driver.

I cried last night watching this video of the press conference yesterday at the site of the tragedy.

Although I didn't know her, reports make clear she was a beautiful person. I will continue to cycle around town, including on this very corner. But I'll never forget what happened as I cycle past this location.

At a time like this, I'm reminded of the abomination of a man and the fraud we unfortunately have for mayor of Toronto and his disgusting, heartless, stupid words uttered a few years back when he was just a whiny councillor. In life, Morrison was just a pinko cyclist who didn't matter in Rob Ford's Toronto.

Watch this video of Rob Ford, remember Jenna Morrison and her unborn child and vote accordingly in 2014:

You'll probably enjoy reading this article as much as I did: a spot-on analysis of the fraud's first year in office.
Posted by Matt Guerin at 8:45 AM No comments:
Email ThisBlogThis!Share to TwitterShare to FacebookShare to Pinterest
Newer Posts Older Posts Home
Subscribe to: Posts (Atom)