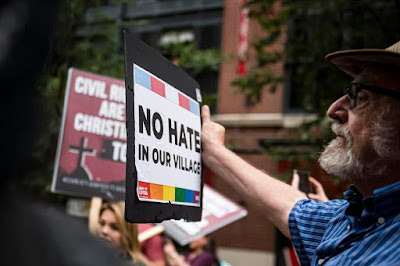 I haven't written anything here since June when I expressed my new love and support for Democratic presidential candidate Elizabeth Warren (a love and support that has only grown stronger.)

My focus these last few months has been strengthening my own day-to-day life and perhaps even enjoying it more. You could say I was being selfish.  Few if any issues in Canada had inspired me to write, despite a lot of course happening as it always does.  I have also disengaged from social media especially Facebook.  I have found myself avoiding most of the new social media platforms that have invaded our lives these last years.  I had been foolish with some of my engagements on those platforms.  I had angered others and undermined some of my own relationships.  I was worried some of my efforts at communication were being seen as shrill.

So instead, I've chosen to disengage.  To step back and re-evaluate.  To try to focus more on real life experiences rather than virtual ones.  But disengaging from these platforms cuts one off from the ways our modern world communicates these days.  Perhaps retreat is not the answer.  Perhaps figuring out how to fight, how to love, how to support each other in this online world is our new real life.

I'm disappointed in myself that I didn't hear about both yesterday's hateful march that tried to move up Church Street in Toronto, and the much larger counter protest defending love and the LGBTQ community, until afterwards.  The counter-protest defended my community by moving down Church Street from a rally outside the 519 Community Centre shortly before noon yesterday.  It had been organized in response to a planned march up Church Street of religious bigots who wanted to bring their hate to the heart of the Church and Wellesley neighbourhood.  The counter-protesters were going to have none of that.  They managed to create a massive human barrier on Church Street south of King Street.  The police barricaded both sides, which managed to stall the bigots from heading north of Wellington Street and perhaps cause physical violence (on top of the spiritual violence they were already spouting).  Streets were shut down for hours until the group of bigots dispersed and went back to whatever miserable lives they are leading.

All of this drama happened before I even heard about it.  How could that happen?  I'm sad to think that my withdrawal has made me blind to the planning of these events.  Facebook invites from the 519 or other groups would've made clear the plans to counter the bigots.  I missed them and I'm ashamed.

Yesterday's planned march against LGBTQ people wasn't a surprise.  It was planned by evangelist preacher David Lynn, who was arrested in June at the start of Pride month for causing a disturbance after attempting to preach hate in the Village and sparking loud and angry confrontations with local citizens.   Imagine a white supremacist taking his hatred to the heart of the Black community, then complaining about being silenced when he gets shouted down.  He was lucky he didn't get punched.  This kind of aggressive religious bigotry is becoming more common.   Yesterday's march was just the latest manifestation of it.  The haters have been emboldened in recent years by the likes of Donald Trump and powerful conservatives like him.  A misplaced sense of victimhood, arrogance, and bigotry is a toxic mix.

In recent years, I've not been overly comfortable as a protester.  I'm not one to make signs and march out on the streets, although I have been definitely an activist in other ways.  I did march and chant in the streets when I was a young adult but it's less my style now.  I engage here and there politically when it comes to the big picture and get involved on the occasional campaign.  But it has rarely been fulfilling in recent years.  But some causes are still worth marching for.  Yesterday would've been one of them.  This was literally an attack by hate-filled bigots in my own neighbourhood.  Their signs would've marched up Church Street right past my home had they not been stopped further south.

I need to re-engage now.  I need to start making more of an effort to take part and be active in my community in a real way.  I need to find the energy after work to go to meetings I've been avoiding in recent years.  I need to seek out more opportunities to turn my passion and interest and support into something more than likes on Facebook.  There are opportunities to have real human connections, perhaps in marches, perhaps at other grassroots events, perhaps in Pride parades with folks just like me.

Congratulations and thank you to those great people who did get out there yesterday to defend our community against the bigots.  Who heard about it and took action.  I wish I had been there with you.  I hope to be there next time.
Posted by Matt Guerin at 10:59 AM No comments:
Email ThisBlogThis!Share to TwitterShare to FacebookShare to Pinterest
Newer Posts Older Posts Home
Subscribe to: Posts (Atom)