For all his flaws, Canadians reluctantly accept Trudeau over the far worse Scheer 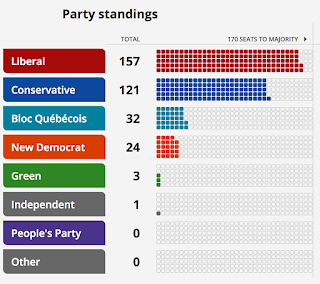 There is a lot to digest about yesterday's Canadian election results.

Due to temporary work duties, I decided not to write publicly on the election while it was still in progress.

But I can say today, like most progressive Canadians, I'm relieved we don't have to endure Andrew Scheer's Conservatives and their regressive, retrograde policies just to punish the Liberals for their misdeeds.

Justin Trudeau didn't so much win this election;  Andrew Scheer lost it.

My main issue with the Trudeau Liberals these last four years has been their basic incompetence in terms of communications and issues management.

Their policy record in government was actually very solid.  Successes included more support for families with children which raised hundreds of thousands out of poverty, re-negotiated trade agreements that protected Canadian interests as much as possible in the face of an aggressive White House, better environmental protections across the board including more thorough and fair approvals processes for major projects, the legalization of cannabis, the reform to how the government appoints senators, better foreign policy with regards to women's rights, and great support for the LGBTQ community.

Despite all these policy successes, the government was largely incompetent in terms of how it communicated those successes or the reasons they had made certain decisions.  I would judge Trudeau's government on issues management as sloppy.

Into that vacuum jumped the country's Conservatives with their constant negativity and hate against all things Trudeau.  Much of it was unfair.  The Trudeau government literally bought a pipeline to keep western energy and economic prospects alive.  For this, they got trounced on the prairies.  Furthermore, the Liberals lost ground in Quebec to the Bloc for their pro-pipeline stance.

In parts of the country where there is almost no Liberal base, support for the Grits collapsed last night.  Looking over the rural results in Saskatchewan and Alberta proves the Liberal brand is almost fringe out there.  Longtime stalwarts like Ralph Goodale were easily pushed aside by the Conservative juggernaut.

The NDP did better last night than it appeared they would at the start of the campaign.  24 seats is a big drop from 44, but the party did manage still a respectable showing.   Jagmeet Singh emerges from this campaign strengthened after two years of bad press.  Plus he now controls the balance of power and will be in a position to get major policy gains from the re-elected Liberals.

Trudeau will truly need to work hard to make this Parliament work and enact any kind of agenda.  He'll likely rely on both the NDP and the Conservatives at times to pass certain things.  These will be interesting times.

But Trudeau has been brought down several pegs.  He deserved it.  His racist blackface controversy in September hurt many in this country and dissolved a huge amount of existing good will for him.   His apologies seemed sincere, and his record in government was clearly pro-diversity.  Yet, it remained unclear how a 29-year-old son of a Prime Minister could possibly think it was appropriate in 2001 to dress up like that.  The vacuity of Trudeau's mind was fully exposed.

Despite this, the strong minority win will give Trudeau a chance to fight another day.  As there are not many viable successors in the wings and things are precarious with a minority, Trudeau will try to make this work and perhaps rise to the occasion.  I bet you he leads the Liberals into the next campaign regardless of what the Conservatives do.

As for Scheer, I truly hope he steps down.  While Trudeau's flaws were enormous, they weren't bad enough to justify looking past Scheer's failings.

Scheer was petulant and uninspiring in this campaign.  There was no real vision that inspired much of anyone east of Manitoba.  Quite the contrary.  His inability to apologize for his homophobic past was particularly irritating.  For him to emerge defeated despite Trudeau's mistakes says it all.  He needs to go.

One more note about Maxime Bernier, whose vanity project ironically called the People's Party now seems finished after winning zero seats last night.  That is wonderful.  He chose to stoke bigotries to try to build his party up.  It failed miserably.

There will be some people who will point to Bernier's failure as a reason to keep our current First Past The Post voting system.   Bullocks, I say.  His party only garnered 1.6% yesterday, which would not be enough for any representation under Proportional Representation (which, if enacted as I would like, would only grant seats to parties with over 5.0% of the vote.)  Even in a mixed PR system with local ridings, Bernier would've still lost his local seat as he did last night.

But First Past the Post actually is exacerbating regional differences in Canada.  The Liberals won 14% of the vote in Alberta yesterday, but have zero seats.  They won 11% in Saskatchewan and also have zero there.  The NDP (16% voter support) and the Greens (6.5%) should've received more representation based on their support from Canadians, but will have to settle with the 7% and 1% of seats they respectively won.  The only solace for the NDP is the fact they now hold the balance of power.

Canadians aren't as divided as our electoral system would have you believe.  We'll see if the NDP demands that electoral reform be back on the agenda as part of this minority government.  I hope so.
Posted by Matt Guerin at 3:32 PM No comments:
Email ThisBlogThis!Share to TwitterShare to FacebookShare to Pinterest

Today, I launched a three-week Indiegogo campaign to help raise much-needed funds for my new narrative short film, Big Snore.  I hope that you might consider helping me out!

As many will know, I've been working part-time on film projects for over ten years.   My first success was co-writing and helping produce a beautiful short film, The Golden Pin, back in 2009 with director Cuong Ngo (the link to view the film is on the right.)  I also worked with Ngo on his first feature film, Pearls of the Far East, as an additional writer and associate producer.

Tri-Curious played in several international film festivals, it earned over 1.5 million views on YouTube before it was exclusively licensed by gay streaming service Dekkoo, and released on a DVD compilation by TLA Releasing.

Since then, I've literally spent the last couple of years contemplating what kinds of film projects to do next.   Making something that authentically expresses my values as an artist and a human being is very important to me.

INSPIRATION FOR THIS NEW FILM:

As I detail on my new Indiegogo campaign page, inspiration for Big Snore happened one late night last year when I was lying next to my partner Samuel in bed while he slept.  I've always been a light sleeper, easily awoken.  Samuel, on the other hand, is a heavy sleeper who occasionally snores. (In truth, Samuel tells me I occasionally snore as well.)

That night, I couldn't find rest as his snores were unusually loud.  I struggled, I shifted in bed often, I took a sleeping pill.  Momentary frustration eventually gave way to inner peace when I remembered how lucky I am to be able to share my bed and my life with this wonderful man!  "What would I do if you ever stopped breathing?" I whispered.  Suddenly, EUREKA!  This could be my new story!  This could be an idea that I can carry all the way to production and beyond.  This story could say something I'd like to say about relationships and love in general.  Inspired, I soon fell asleep and slept like a baby.

I've been working on the script and preparing for this shoot since.  The script details one night in the life of a young gay couple, one of whom snores very badly, the other a light sleeper who struggles to get some needed rest.

I'm not one to spend months drafting up applications and waiting for responses from public funding agencies.  I've found such endeavours in the past to be somewhat futile, especially since competition for such dollars is so fierce.  For now, I'm hoping that this crowd-funding campaign will raise the necessary funds to give some compensation to my actors and crew, as well as fund the film's crucial post-production sound design.

One of my ambitions as a storyteller is to normalize the lives and experiences of LGBTQ people, without whitewashing the elements of our lives that make us unique.  All audiences want stories that are honest but also connect with them emotionally.   I'm hopeful that Big Snore will earn many chuckles and nods of appreciation from all audiences.

I hope you might consider contributing to this project.
Posted by Matt Guerin at 12:55 AM No comments:
Email ThisBlogThis!Share to TwitterShare to FacebookShare to Pinterest
Newer Posts Older Posts Home
Subscribe to: Posts (Atom)