On this 'Trans Day of Visibility,' I give you Laverne Cox. 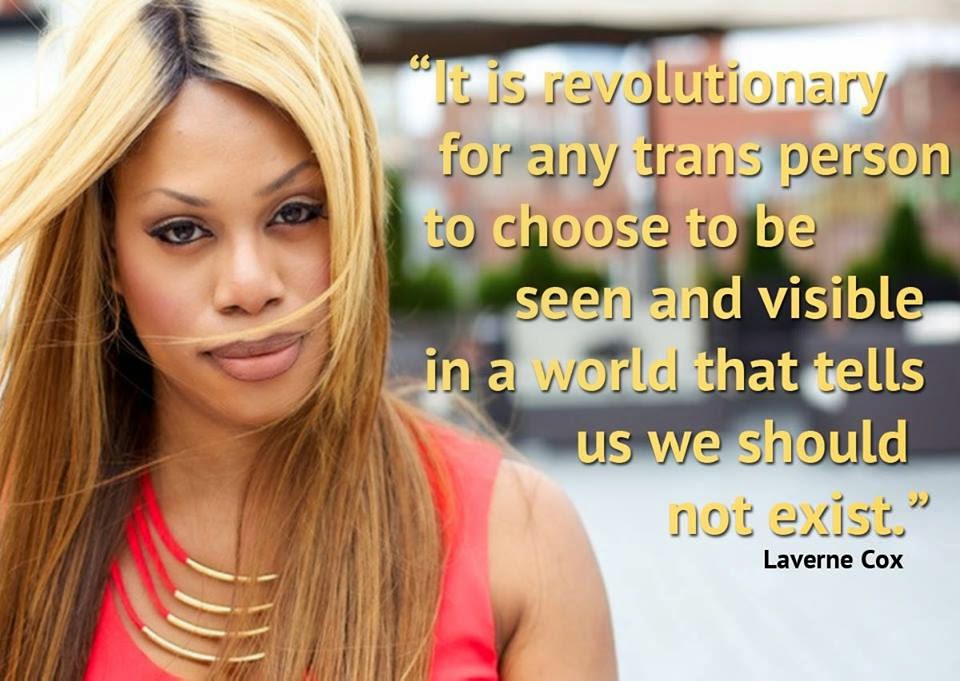 And a link to this nice story about Yasir Naqvi and Cheri DiNovo working together to fight federal Tory anti-trans shenanigans.


Posted by Matt Guerin at 5:10 PM No comments:
Email ThisBlogThis!Share to TwitterShare to FacebookShare to Pinterest

Stephen Harper is a deeply immoral and dangerous man

After watching this sobering, fascinating interview with famed political philosopher Charles Taylor on yesterday's Power & Politics, I'm more convinced than ever that my headline is true.

Taylor was commenting on Stephen Harper's recent statement that the niqab is rooted in a culture that is "anti-women."

"How dumb do you have to be to not see that a remark like that in the present context [of heightened tension around the issue of Islamic terrorism] is inflaming," Taylor said in an interview on CBC News Network's Power and Politics.

Have a look for yourself:

Taylor went further today stating that Harper is playing into the hands of ISIS by stigmatizing ordinary Muslim Canadians with his rhetoric.

"Ask yourself what are the recruiters for Islamic State saying? They're saying (to Muslims), 'Look, they despise you, they think that you're foreign, you're dangerous, you're not accepted here, so why don't you come with us?'" Taylor said following a speech to the annual summit of the Broadbent Institute, a social democratic think-thank.

"The more you make it sound like that (is true), the more you're helping them. And it's strange that people don't see this."

I quite agree with Taylor that Harper's ideology of never-ending war in the Middle East, coupled with his xenophobia, is actually the strongest root cause of terrorism in Canada we've got.

Conservatives and their ideology are actually inspiring the terrorism they claim to be fighting.

I look at Harper's move this week extending the military mission against ISIS into Syria as more of the same strategy.  It's like Harper is enacting policy today simply to rectify mistakes he thinks Jean Chretien made in the early 2000s when Canada wisely stayed out of the Iraq war.  As you'll recall, Harper would've - had he been Prime Minister then - forced Canada to join in the U.S.-led mission to take over Iraq.

Today, the U.S. is leading the mission against ISIS in Iraq and elsewhere simply because it knows this is their responsibility after having created the conditions for ISIS with the 2003 Iraqi invasion and subsequent bungling of the rebuilding process, as made clear in this Stephen Maher piece today:

"U.S. President Barack Obama has been forced to back Iranian-supported militias to bring order to what remains of [Iraq] and to fight ISIS....The Americans own Iraq’s problems, and have no choice but to put together an international coalition to fight ISIS."

Yet Canada didn't support that invasion and didn't take part in it.   Why are we participating in the fight today?  Because Stephen Harper feels compelled to engage with the Americans in this fight - as a consequence of his own support for the Iraqi invasion 12 years ago.   He's acting today as if he had been prime minister then, engaging Canada in a combat mission against a foe that can never be defeated.

But back to Harper's anti-Muslim rhetoric.  Even if you assume that Harper's xenophobe-baiting language isn't genuine, but may just be a political calculation designed to increase Conservative party support in an election year, think about how horrifying it is to have a "leader" who engages in such things.

He's either a bigot himself, or he's happy to fan the flames of bigotry to win more support.  Sort of like Bush in 2004 who used anti-gay bigotry to inspire his base.

Yes, it felt good to hear Tom Mulcair describe Harper's mocking of international law this week as "idiotic."   This is Mulcair's natural reaction to Harper's depravity - to return the insult and lower the debate even further.   For this, he inexplicably continues to get the support of NDP partisans and other far-left dummies who are the other side of the ideological coin as the rabid racists and bigots under Harper.  To them, Mulcair and the NDP somehow represent ideological purity and can be counted on to always be progressive and never flip flop like those dastardly Liberals.  Of course, they ignore the countless times in the past the NDP has flip flopped and turned its back on some of its most sacred principles, such as artistic freedom, when it suited them.

They also ignore the fact that the NDP position on Bill C-51 (Harper's anti-terrorism bill that would give CSIS more powers) is virtually identical to the Liberal position.   The NDP is making a big deal out of their planned symbolic vote against the bill, but isn't talking about the fact they will not repeal it should they ever form government.   It's clear the NDP is simply using C-51 as a tool to attack the Liberals, and sadly some thoughtless progressives seem to be falling for it.

I do have some problems with Bill C-51 and will blog about that soon, mainly the lack of robust oversight.  But I'm comfortable with the federal Liberals' position on it.  I'm not going to fall for the NDP's pointless grandstanding.

Despite their faults, I remain very happy that we have one leader and party - Justin Trudeau and the federal Liberals - that remain well-positioned to challenge the Harperites for government this year.

I've been busy with vacations and work this month so I wasn't able to blog about this great speech when it happened, but I'm glad to post the entire speech below.  If you're concerned about Harper's hate-baiting, you might find Trudeau's message to be a wonderful tonic.

Yes, I agree that Trudeau has yet to show his hand on a number of policy fronts.  There has been some big picture talk about helping the middle class, growing the economy from the bottom up, governing more openly, playing a more balanced and cooperative role in world affairs, etc.   And now that speech at the height of the debate into the niqab and reasonable accommodations.  It showed off yet again Trudeau's brilliant timing and communication abilities.

Do I think Trudeau is ready to be a great prime minister?  He's certainly well on the way to proving it, but yes he has more to prove.  Do I expect him later this year during the election campaign to truly show Canadians what he's made of and impress or even surprise them?  Yes I do.   Will it be enough to win outright?  Yes, if he convinces the progressive left to give him a chance.

Those on the left continue to indulge themselves by flirting with the go-nowhere NDP or the Greens.  They ought not.   The NDP will never defeat the Conservatives from office in Ottawa.  At best, they'll do what Jack Layton did in 2011 - come in a distant second to a Conservative majority.   And the Greens, except in 2 constituencies on Vancouver Island, are just spoilers, dividing the opposition vote and making it easier for Conservatives to win again and continue to destroy the environment.   Yes we have a crappy electoral system, but there's nothing we can do about that this year, folks.   Except in the ridings where the NDP or Greens are the main opposition to the Conservatives, progressives need to vote Liberal.

It seems the thinly-veiled, socially conservative extremist face of the Conservative movement in this country is showing itself more honestly lately.

These folks belong no where near the levers of power.  I'm glad the Ontario PCs remain stuck in opposition and reportedly intent on staying there (if the weekend's membership recruitment numbers prove to be true.)

I hope our misguided federal Conservatives - with a caucus filled with dinosaurs like Cheryl Gallant - get knocked back into opposition where they belong this year.
Posted by Matt Guerin at 11:36 PM 2 comments:
Email ThisBlogThis!Share to TwitterShare to FacebookShare to Pinterest
Newer Posts Older Posts Home
Subscribe to: Posts (Atom)