I'll be voting for Joyce Murray even though I hope Justin Trudeau wins Liberal leadership...

I've always been a left-leaning Liberal. I've always been slightly anti-establishment. Since I was a recently out university student, I've always wanted to push the Liberal Party to be more activist, more open and more progressive. Those blue Liberals who believe in little more than lower taxes, deregulation and the colour red have always pissed me off. The folks who seized power and did nothing with it but cut corporate taxes and ignore their promises to strengthen public services and health care had little business calling themselves Liberals, in my estimation.

But then again, the establishment was dead wrong when they hoisted Paul Martin on the country. They were also wrong when they forced Liberals to choose between Michael Ignatieff and Bob Rae in 2006. In the end, Liberals including myself rebelled and voted for the best alternative we could find, Stephane Dion, who turned out to be quite disastrous. That choice forced me to reconsider my instincts. In 2008, I decided to backtrack and supported Ignatieff's acclamation as leader. That proved to be even more disastrous.

I continued to question my old instincts in the Ontario Liberal leadership race this year. It's true that I knew Sandra Pupatello and all of her staff quite well from my days at Queen's Park (1999 to 2004.) That personal connection, as well as Pupatello's strong performance during the campaign, made the difference for me in endorsing her over rival and eventual winner Kathleen Wynne. I had no personal connection with Wynne as she had only been elected in 2003. I had heard great things about her from those who worked with her. But I had never experienced that greatness personally. Thus, her ascendancy to the leadership in January surprised me. I had never seen what she was capable of until she won the leadership. Since then, Wynne has massively impressed me and I've become quite the Wynne fan.

Had I not had a personal connection to the Pupatello campaign, and had I decided to trust my old anti-establishment instincts, I might have endorsed Wynne instead in that leadership race. As experience is now proving, voting for Wynne would've been the right choice.

Which brings me to the current federal Liberal leadership race. Justin Trudeau is probably going to win this thing on the first round of balloting. This has never been much of a contest. And it seems he's the right person for the times. He's passionate and has no trouble drawing huge crowds and money to his campaign. He's done the hard work of going across the country and speaking in church basements and elsewhere for years. In this race, he has taken nuanced policy stances that indicate fresh thinking mixed with pragmatic and reasoned judgment. I like his stance on preferential balloting in general elections. I like his stance on marijuana. I like his focus on helping out the middle class who are the lifeblood of the economy. He's casting himself as a new generation of dynamic leadership for a country growing bored of the same-old-same-old of Stephen Harper.

Justin is very green, of course. He still comes across occasionally as a guy in slightly over his head. But he's shown growth over the course of this leadership race. Like Wynne said shortly after winning the Ontario Liberal leadership, leaders are "forged" in the battle to become leader. There is little life and work experience that can adequately prepare you for the role of national or provincial leader. It's very much showing the potential for growth and earning the position, after which you continue to grow and hopefully soar. Justin Trudeau looks quite capable of such growth. If things go his way, and they just might, he may eventually lead the federal Liberals back into contention for government. 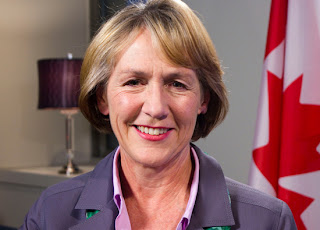 But this time, I'm going to trust my instincts and vote for Joyce Murray (pictured) as my first choice. Trudeau will likely be my second choice on my preferential ballot. Electoral reform has long been a passion of mine, even though I think the cause for proportional representation in Canada is largely a dead one. Four referendums on the subject have all but killed the various PR options on the table, in my mind. To me, moving to preferential balloting would be the type of reform Canadians might embrace, but nothing more radical (hence, perhaps, why Trudeau has endorsed such a reform.)

But I quite like how Murray has focused her campaign on some really meaty, leftie issues like electoral cooperation, the environment, marijuana and a number of other issues. While she's never been a high profile MP, Murray has been able to seize a lot of attention in this race and is hitting her stride at the perfect time. I got the chance to meet her briefly at the Ontario Liberal leadership convention in Toronto in January and was impressed with her. She's the only candidate I have actually gotten to meet in person in this race.

Other also-rans like Martha Hall Findlay, Martin Cauchon and even Marc Garneau failed to impress me much. Garneau's a nice guy, I liked his stance on opening up the telecommunications industry to more competition, but a 63-year-old, charisma-challenged dude is not what the Liberal party needs this time. We need an energetic, exciting fighter who has at least 10 years to offer to do the grueling work of rebuilding and re-connecting with Canadians. Garneau saw the writing on the wall and dropped out of the race.

Cauchon's campaign this time has been boring and, true to his history, launched way too late to have much of an impact. Cauchon should've stuck around as an MP in 2004 instead of quitting when Paul Martin took over. If Cauchon had been still around, he would've spared us the unfortunate return of Jean Lapierre to federal politics. He would've also spared us the Outremont byelection forced after Lapierre abandoned the party yet again and made way for Thomas Mulcair's NDP win in that riding. Cauchon should've run in the 2006 federal Liberal leadership. Liberals that year were desperately looking for alternatives to Ignatieff and Rae. So they chose the only francophone in that race, Stephane Dion. If Cauchon had been on the ballot, he might've even kept Dion out of that race and won the whole thing as the compromise francophone candidate. And history would've been different. However, Cauchon made his choices and the rest is history. He missed the boat long ago. Timing is everything in politics and Cauchon has the worst timing.

In truth, I think the best future for progressive politics in Canada would be to see the federal Liberals and NDP merge into one new party. It would be called the "New Liberal Democratic Party of Canada" or NLDP. It would combine the untainted history of the NDP, with strong support in parts of the west and now Quebec, with the traditional support of the Liberal Party in Ontario and Atlantic Canada. If viewed as moderate, but still authentically progressive, it could be the equivalent of the Democratic Party in the U.S.

To that end, I view a vote for Joyce Murray in this race as the best way to voice my position. A vote for the electoral cooperation candidate is the best vote in favour of the progressive forces in this country coming together under one banner. In truth, I accept the fact that a merger is not in the cards anytime soon. Tom Mulcair and the NDP remain convinced they can still beat the Conservatives on their own. The road back to a federal Liberal government seems more long-term and perhaps even more naive. Once both parties become convinced they can never win on their own against a united conservative party, they will decide to merge into one, just like the old Canadian Alliance did with the Progressive Conservatives. Until then, I will be voting for those who voice support for working together and coming together for common cause. A divided centre-left in Canada is simply a recipe for more Conservative governments. And that is not a tolerable option for Canada anymore.

Joyce Murray might make a terrible leader, but I'm voting for the causes she has championed, not so much for her personally. I fully expect Justin Trudeau to prevail on April 14th. I just hope that support for cooperation is strong enough to be noticed amid that victory and not forgotten as we move forward.

Posted by Matt Guerin at 4:10 PM 12 comments:
Email ThisBlogThis!Share to TwitterShare to FacebookShare to Pinterest

I'm really glad this bill passed the House of Commons today. But the close vote - 149 in favour, 137 against - is slightly disturbing. But then again, we have a strong, stable, secure Conservative majority under Stephen Harper, who regrettably was among the 137 opposed. I guess we're lucky to get this passed under these circumstances.

On one side, we had the NDP, most Liberals, Elizabeth May, the Bloc Quebecois, an independent and a handful of Conservatives (including cabinet ministers John Baird, Jim Flaherty, Lisa Raitt and James Moore) in favour of allowing transgendered and transsexual people to live free from 'gender identity-based' discrimination. On the other side, we had the so-cons, including Rob Anders and Stephen Harper.

When Rob Anders is voting with you, you have a major problem! Anders' attacks on this bill were complete misinformation designed to whip up ancient fears against people who are different. A good friend of mine was transgendered. I'm thinking of him tonight as I smile at the result in the Commons today.

This is a largely symbolic change to the federal anti-discrimination laws but it sends a much-needed message.