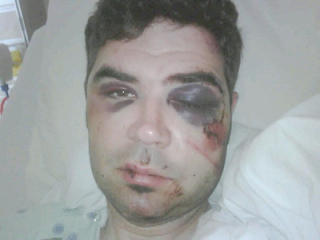 This is shocking and repulsive news. A Thunder Bay gay man is in hospital for reconstructive surgery after being attacked early Saturday morning in what his family calls a hate crime.

John "Jake" Raynard (pictured) reportedly suffered 15 fractures to his cheekbone, a broken eye socket, a broken jaw and a broken upper palate when six to eight men surrounded him and two friends outside a Thunder Bay bar.

I look forward to the police investigation and hope those bigots involved are brought to justice!

Raynard's friends and supporters have set up this Facebook group to keep those concerned informed.
Posted by Matt Guerin at 5:52 PM
Email ThisBlogThis!Share to TwitterShare to FacebookShare to Pinterest

This is terrible..what kind of people could do that..no feelings what so ever. I hope they catch those who did such a thing. I am a mother and I could guess his mother would feel the same