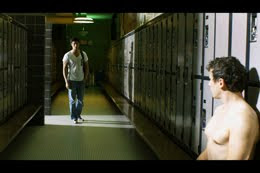 'The Golden Pin,' the short dramatic film I co-wrote and helped produce, has its European premiere today at the Oslo Gay & Lesbian Film Festival in Norway. Sadly we are not wealthy enough to attend, saving up valuable vacation time and money for later. But it's an honour to have been selected by the festival's programmers. We wish we could be there!

'The Golden Pin' is about a young swimmer torn between the expectations of his family and the demands of his heart. Here are our Facebook pages, which include details of future screenings.
Posted by Matt Guerin at 12:03 AM
Email ThisBlogThis!Share to TwitterShare to FacebookShare to Pinterest

Congratulations! Looks like a great film. Hope to see it. :)

Congratulations Matt !!! And BTW I want to remind you that when you are famous and living in Hollywood I expect to be invited to your pool party...and introduced to James Franco... :)