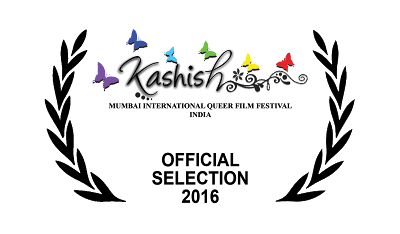 I'm thrilled to announce that my short film 'Tri-Curious' is heading to Mumbai, India for its World Premiere at the end of May in the Mumbai International Queer Film Festival, known as KASHISH.

Organizers invited the film in mid-April but I couldn't announce it until the festival released its lineup on the weekend.

This is a tremendous honour as KASHISH is South Asia's biggest and India's only "mainstream LGBT film festival", now in its 7th year.   It runs from May 25 to 29, 2016.  The overall festival theme this year is '7 Shades of Love,' and organizers have invited 182 films from 53 countries to screen.  I don't yet know when my film will be screening, but I'll announce that when I hear.  The film festival will be held at three venues – Mumbai’s iconic art deco Liberty theatre, Alliance Francaise de Bombay and Max Mueller Bhavan.

The festival doesn't get much institutional or corporate support, I'm told.  Thus, they can't sponsor filmmakers to travel to attend.  Instead, funds raised go to putting on the event.  To that end, the festival is raising funds through crowd sourcing.  Please check out the details here.

But what a thrill to have my little short film find an audience on the other side of the planet.   Congrats to everyone who worked on the film for this great honour!  Here's a YouTube video the festival posted with highlights from its 2015 festival.

Also, please take another look at the trailer to my film if you wish - the YouTube link is on the top right of this blog.  Glad to say it has almost 34,000 views so far.

I'll post more info on my screening and the 2016 festival over the coming few weeks.
Posted by Matt Guerin at 9:34 AM
Email ThisBlogThis!Share to TwitterShare to FacebookShare to Pinterest