Inside Out Festival's new gay film trend: the Post-Gay Man...

The 25th annual Toronto Inside Out LGBT Film Festival has just wrapped up for another year. Dozens of films were consumed by audiences, many enjoyed, others hated.

My favourite: an astonishing short film called 'Hole,' (pictured above) by director Martin Edralin, filmed in Toronto, about an older disabled man yearning for intimacy in a world that would rather ignore him.  Lead actor Ken Harrower, who's greatly disabled himself, does mesmerizing work portraying his character's quiet dignity and agony, as well as frustrated lust for his home care male nurse.  I won't soon forget this amazing film, which won Best Canadian Short at the festival.

You can view the short's trailer below:

Among the feature films I saw, I liked Lily Tomlin's new film 'Grandma,' which opened the festival.  Tomlin sufficiently chewed up the scenery with her cranky, grieving, penniless matriarch trying to help her granddaughter find money for a quick abortion.   It was very enjoyable, not too melodramatic, showcasing Tomlin's talents as well as the rest of the cast.

But many male-centred films I saw this year explored stories about sexually ambiguous men, or presumably heterosexual men who face few if any agonies over their sexual identities, but end up flirting with their gay sides in less-than-cut-and-dry romances or bromances.  Some might refer to these identities as "post-gay," or label-free sexualities that don't fit neatly into identities like "gay" and "straight."

One such film I loved was the Brazilian flick by directors Filipe Matzembacher and Marcio Reolon called 'Seashore' (pictured below.)  Two cute boys on the edge of adulthood, Martin (seemingly very heterosexual) and friend Tomaz (who we at first suspect is gay and later he confirms it to his old friend,) begin a journey to a seaside community to do Martin's absent father a mysterious favour.  We later find out Martin's father is too much of a coward to do the task himself - which is to obtain a property document to evict some estranged family from their longtime home.

The story unfolds in casual and oft confusing fashion, with few of these facts explained clearly until the audience puts all the clues together along with the protagonists.  At the end, unhappy with his father's behaviour and looking for some youthful rebellion, young Martin decides to engage in some experimental (and fairly steamy) sex with Tomaz.

I'll cautiously recommend the film, but will warn that its slow pace and minimal characterization might drive some viewers crazy.  Several audience members walked out of my screening.   Here's the trailer:

'Seashore' wasn't the only film that focussed on "post-gay" males.

Nils Bokamp's slight 'You & I' (pictured below) was entertaining, thanks to the immense good looks and frequent nudity of its three male leads.   Old friends Jonas (supposedly straight) and Philip (openly gay) embark on an excursion through the German countryside to take photographs, skinny dip, and have some fun. 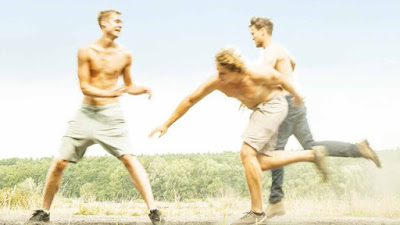 SPOILER ALERT: Along the way, they pick up Polish cutie Boris, who makes the moves on Philip, causing unexpected jealousy in Jonas and some sexual tension.  In the end, jealousy seems to spur Jonas to admit his own sexual affection for his longtime friend Philip.

Focussing on similar themes, Santiago Giralt's feature 'Jess & James' from Argentina was feeble by comparison, boring and unaccomplished, with weaker storytelling and acting.

Marçal Forés' very ironically titled 'Everlasting Love,' was a subversive take on the old storyline trope of older man/much younger lover.  Not much sexual ambiguity here, but much darker and surprising stuff instead including some cannibalism.  After its final credits started to roll, I whispered to myself, 'That's fucked up.'   I'll say no more.  Many in the crowd seemed to hate it, but I found it darkly hilarious.

Inside Out also screened a new director's cut of '54', the 1998 bomb starring a gorgeously young Ryan Phillippe.  Miramax butchered director Mark Christopher's original cut, taking out all the queer content and turning a mediocre examination of the late 1970s New York city club into a boring, sanitized mess.

The director's cut was mildly more enjoyable than the original, with at least the queer content and sexual ambiguity restored.  The infamous kiss between Phillippe and co-star Breckin Meyer, cut from the original film, is back, but it's still not all that great a shot (as the camera focuses on the back of Meyer's head instead of their locked lips.) After its finale, I walked out of the packed screening feeling a bit dirty and unsatisfied.  But clearly the lurid subject matter might make this re-cut a bit of a gay cult classic.

So all in all, a decent Inside Out experience again this year.  Gone are the oft-told, perhaps old-fashioned stories of closeted queer boys struggling to come out.  In their place, we are seeing a different approach to sexual identities, with men who might legitimately identify as "straight," find themselves open to a little queer action.  The boys are finally catching up to the girls, who've been enjoying sexual fluidity on the screen for years.  It's a nice change and very welcome.
Posted by Matt Guerin at 6:20 PM
Email ThisBlogThis!Share to TwitterShare to FacebookShare to Pinterest