Check out 80s musical spoof 'Eternity: The Movie' at the Carlton this week... 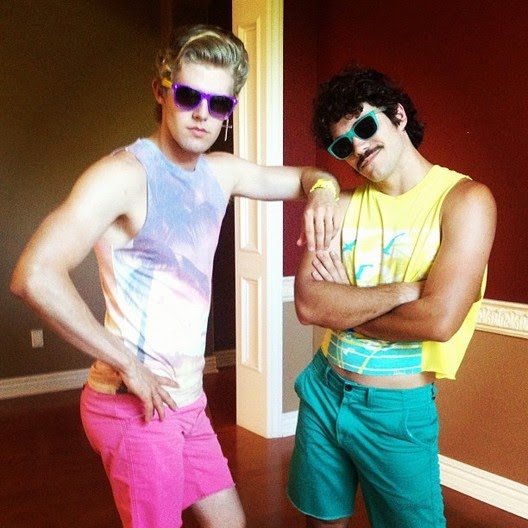 Tonight, my boyfriend and I saw and thoroughly enjoyed the charming 80s musical spoof comedy film, 'Eternity: The Movie,' at Toronto's Carlton Cinema.  I wanted to give the flick a shout-out.

Directed by Ian Thorpe and starring the very adorable Barrett Crake and Myko Olivier (pictured)
as would-be R&B music sensations who launch the duo Eternity in 1985 (with more than a passing resemblance to Daryl Hall and John Oates), it was silly, sexy and playful from start to end, never taking itself too seriously.

And with tonnes of not-so-subtle homo-eroticism between the cute leads, there was plenty for gay male and gay-loving audiences to enjoy.  Honestly, I got a bit lost in Olivier's beautiful eyes (see why below), and his lovable loser routine never got tired.  Plus many of the ballads, including 'Make Love (Not Just Sex)' and 'Alana' were hilarious.   Crake and writer/producer Eric Staley were on hand for a Q&A after the flick and Crake mentioned he'll be appearing in an episode of the final season of 'Glee.'

It would be nice to see this indie flick turn into a cult hit.  It's not going to win any Oscars, but if you're not looking for serious fare and just want to laugh at an 80s spoof, check it out at the Carlton this week if you can.

Posted by Matt Guerin at 11:58 PM
Email ThisBlogThis!Share to TwitterShare to FacebookShare to Pinterest