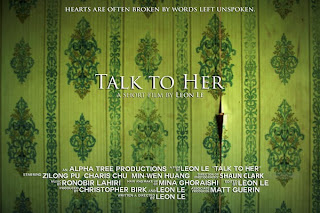 Please allow me to put aside politics for today and instead write about a new short film project being undertaken by my friend, director Leon Le.

I'm proud to say that Leon's launched an Indiegogo campaign to help raise funds to produce the film, tentatively titled 'Talk To Her.' The film is about love, acceptance, and missed opportunities and it explores the complicated relationships between Michael, a second generation Chinese-American man, his mother, and his girlfriend of two years to whom he plans to propose.

Leon Le is an extremely talented director and artist who produced/directed/wrote/edited another short film in 2012 called "Dawn," which I worked on as associate producer. It was a gritty, realistic and moving film about a young black man who detects what he considers to be a racist glance from another passenger on a subway, whom he follows off the train to try to teach him a lesson, to shocking results. Here's the great trailer below:

"Dawn" has already played at over 20 film festivals and continues to find audiences and win awards.

This is the next film project by Leon Le and I'm happy to say I'm also working at Associate Producer on it as well.

If you would like to invest in the project and help make it happen, please consider giving to the Indiegogo campaign. Every little bit helps!

And speaking of helping out friends, another good friend of mine, Jefferson Darrell, is growing a moustache for Movember. If you want to help him out, here is the Movember Canada link to his campaign.

Posted by Matt Guerin at 1:50 PM
Email ThisBlogThis!Share to TwitterShare to FacebookShare to Pinterest