Another tragic loss of a beautiful young gay man...

Have a watch of this video shot by yet another talented, beautiful, young gay man whose life was cut short this weekend by suicide. Every gay man understands the pain and isolation that Jamie Hubley expressed on his blog recently (see the image borrowed from Towleroad.com below). 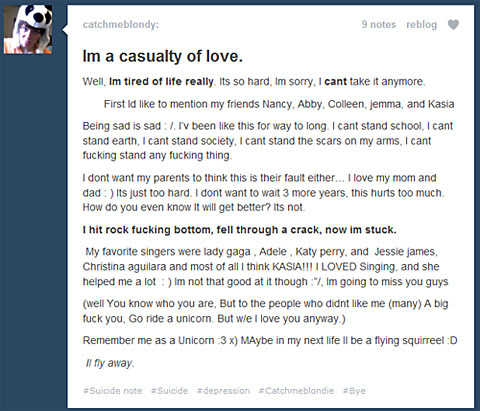 It brings tears to my eyes to know that Jamie's depression was left unabated and the only escape that Jamie could conceive was suicide. In my own moments of despair and isolation as a closeted 15-year-old in the late 1980s, I too contemplated suicide as the only way out. But I never made the attempt. I somehow got through it and made my way into adulthood, came out and embraced a better life. It did get better!

Queer youth remain isolated and extremely vulnerable in our society and in our schools. But I couldn't agree more with one comment on this YouTube page that, ""It gets better" is not enough, we﻿ need to "Make it better"".

Fighting homophobic bullying (and all forms of bullying) must be the highest priority of our schools now! We have to start demanding real action! We have to start attacking politicians and so-called Christians who continue to fight against any attempts to minimize homophobic bullying in our schools and create respect in our schools for diversity! Any attempts by any public school boards to stop Gay-Straight Alliances need to be stopped in their bigoted tracks and those guilty removed from their public positions! For the sake of our youth!

Below is the statement released today by Jamie's father, Kanata councillor Allan Hubley. My thoughts go out to Jamie's entire family and friends in this moment of tragedy.

This past Friday, our family suffered one of the worst experiences that can happen to a family when we lost our boy — Jamie. To make this even more difficult, his death was the result of suicide.

I would like to thank all the family and friends that have been helping us get through these very difficult days. Very special thanks to everyone that came out in the rain to walk every foot of our community to look for our boy. The outpouring of support has shown us that our angel was loved by many and we were not the only people to witness his beautiful spirit.

Jamie was for most of his life a very happy and confident child. He was a compassionate person always looking to help others and didn’t have a mean bone in his body. Jamie often worked with me on community events and our many efforts to help others were made more effective with his ideas. From a very young age, he wanted to make a better community and a better world.

He was a championship figure skater for years and was just beginning to excel as a singer. He enjoyed acting as well and was involved in many different clubs and groups both in and outside of school. James’s family and friends unconditionally supported and accepted him for who he was and whatever direction he wanted to go in life.

James had been suffering with depression and was receiving care from doctors at CHEO and counsellors. These professionals, along with James’s family and friends, were trying to help him learn to cope with his depression and other issues, one of which was his struggles with his sexuality. He struggled with the idea that people can judge you harshly even when you are trying to help others. Jamie asked a question no child should have to ask — why do people say mean things to me?

Although James had a great many people who loved and supported him, something in his mind kept taking him to a dark place where he could not see the positive side of life, which led him to this drastic and tragic decision on Friday. Jamie is free of his pain now and there is a new angel, but we have paid too high a price.

There are some reports in the media and on social media that James was bullied. This is true. We were aware of several occasions when he felt he was being bullied. In Grade 7 he was treated very cruelly simply because he liked figure skating over hockey.

Recently, when Jamie tried to start a Rainbow Club at his high school to promote acceptance of others, the posters were torn down and he was called vicious names in the hallways and online. We had meetings with officials at the school and were working with them to bring an end to it but Jamie felt it would never stop.

We will not say that the bullying was the only reason for James’s decision to take his own life but it was definitely a factor. As his family and friends, or even if you never met him but want to help, we must do whatever we can to wipe out bullying for any reason in our society and especially in our schools. Young people are very vulnerable and have enough pressures in life to have to deal with aside from the stress of being bullied. My family’s wish is that no more families have to suffer the unbearable pain of losing a child. No child should have to deal with depression or feel hated because of their beliefs — that is not the Canadian way of treating others.

Bullying doesn’t always take the form of physical violence. Especially today with cyber-bullying on the Internet, children often feel there is no safe place to go; even when they are at home they can still be victims. Earlier I mentioned his posters being taken down. Many friends have offered to stand by the posters to ensure children that may want to meet and talk about issues that don’t harm others will be given the chance to do so. The school has made a promise to me that they will ensure the posters are protected. We hope from our tragedy others will become more active in stopping this cruelty towards children.

To this end, after my family and I have had some time to come to terms with the loss of our beautiful son James, I will be working hard to use my energy and public position to help bring awareness and resources to those groups working to stop the bullying and find a treatment for depression. Wendy and I have asked that all the people wishing to make a donation in Jamie’s memory can direct them to Youth Services Bureau’s Mental Health Walk in Clinic.

Over the years I have tried to help a lot of people and I was very proud that my beautiful boy was also learning the joy that comes from helping others. I need time to deal with the pain of not being able to save my precious boy and will speak more on his life and these issues later.