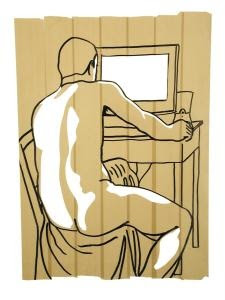 The following piece by yours truly appeared in today's issue of Toronto's Fab Magazine on the Conversation Page. People who change careers like Diablo Cody give the little people like me great hope. Just think, an Oscar nomination could be just one produced screenplay away!

Diablo Cody is my hero

Sometimes you don’t find out until well into your adult years both what you’re good at and what you like doing. How many of us wish our missions in life had been crystal clear earlier? That our passions were complementary, not divergent?

I used to have a career in politics but, to paraphrase a great prime minister, I felt like I was “stuck in the snow.” Three years ago, I backed up and restarted my journey.

But when it comes to career changes, nobody beats Diablo Cody. The 29-year-old first-time screenwriter from Chicago used to be a bored secretary and proofreader before becoming a stripper and phone sex operator. Now she’s an instant star for penning the hit film Juno. How’d she do it?

Cody wrote about her stripping career on her blog Pussy Ranch. It became a popular site and caught the eye of Hollywood producer Mason Novick, who approached Cody to encourage her to become a screenwriter. “I didn’t recognize [Novick’s email] as lifechangingly important at all,” Cody says, “It was just an email and it seemed kind of random and creepy, in fact.” But she wrote a film and now she’s nominated for an Oscar.

Had I known that stripping could lead to a successful Hollywood writing career, I might’ve lost my kit in public long ago. I did pose nude two years ago for Toronto artist Rob Waters [above]. Doesn’t that count?

Maybe I should change my name. Cody’s real name is Brook Busey-Hunt but her new name came from hearing the song ‘‘El Diablo’’ while passing through Cody, Wyoming, after getting married in Las Vegas. As I work on my next screenplay, should I sign it “Angel Arkansas” or “Fantasma Ohio?”

Matt Guerin’s blog is queer-liberal.blogspot.com. He welcomes any and all emails from Hollywood producers.
Posted by Matt Guerin at 12:00 AM
Email ThisBlogThis!Share to TwitterShare to FacebookShare to Pinterest