Away from Her: One of the most brilliant cinematic portraits of love I've ever seen 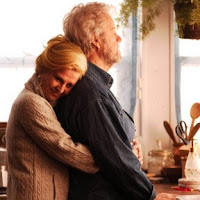 I realize I'm several months behind on this (as this film debuted last year at the Toronto International Film Festival), but I finally had a chance to view Sarah Polley's quiet masterpiece, 'Away from Her' over the weekend and wanted to write about it.

If you haven't had a chance to see this film (and judging from its respectable, yet small box office in limited release earlier this year, you haven't), you should definitely consider seeing one of the best films of the year.

I'll admit, the subject matter about an older couple (Julie Christie and Gordon Pinsent, pictured) struggling to deal with the onset of Alzheimer's disease might deter some viewers looking for a quick or dumb Blockbuster fix. Yet you'd be missing a quiet gem and one of the best Canadian films in years. I don't recall seeing a more beautiful portrait of selfless love in a movie (from any nation) than this.

Based on a short story by Alice Munro, the film follows the sudden degeneration of Julie Christie's character Fiona and her husband Grant's struggles to assist her. She makes it difficult for him (and the film hints this may or may not be due to the disease). Her condition becomes so bad she decides to check in to a nearby seniors' care facility. While there, her memories of her marriage seem to fade entirely and she develops an affection for another man, leaving Pinsent's Grant in a funk. Grant then figures out a beautiful way to possibly bring his wife, growing increasingly depressed and remote, some possible happiness.

Most people will see this movie to check out Julie Christie's exquisite performance. She is mesmerizing for every second of her time on screen. The rest of the cast circle around this screen icon and give perfect performances, especially Pinsent. There has been talk of late that Christie will win another Oscar nod for this performance, which would be a delight. I also hope that Pinsent will be acknowledged by the Academy, either in the Lead Actor or Supporting Actor categories. Polley, as writer and director, may also be acknowledged by the Hollywood elites. How wonderful that would be and ironic for an artist who has shunned the Hollywood lifestyle for years. I'm sure this film will dominate the upcoming Canadian Genie Awards, with Pinsent and Christie in their respective leading Acting categories, and Polley in both the writing and directing categories.

The ending brought me to quiet tears. It's been a while since a film made me cry, I tend to be a hard emotional nut to crack. So when it happens, I must take note. I intend to buy this movie.

Polley's achievement here is absolutely astonishing. At such a young age (28), Polley has written and directed a quiet masterpiece about the tragedies that can occur at the end of relationships and the undying and complicated power of love. I won't forget this film.
Posted by Matt Guerin at 12:19 PM
Email ThisBlogThis!Share to TwitterShare to FacebookShare to Pinterest

I am not much of a movie person but I would like to see this one.