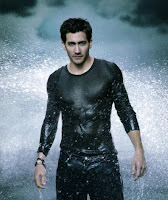 The website in question is of course the popular AfterElton.com. They came up with a top 100 hotties list that gay men everywhere can enjoy.

It's hilarious there was little congruence between AfterElton's list and People Magazine's Sexiest Men Alive. George Clooney came in at No. 92, Brad Pitt was ranked No. 12 (okay, well-deserved) and Matthew McConaughey made it to the No. 38 spot. Tom Cruise not only didn't make the list -- he didn't earn a single vote.

It seems straight women and gay men continue to differ somewhat over what constitutes male beauty. Only Brad Pitt ranks highly with both groups.

At the top of the AfterElton hot list is American heartthrob Jake Gyllenhaal (pictured). I couldn't agree more. I've been in love/lust with Jake for years, long before Brokeback Mountain came out.

But the five Canucks on the list are quite deserving, in my opinion: Vancouver's Ryan Reynolds, 30, placed No. 6 on the list; London, Ont. native Ryan Gosling, 26, came in at No. 24; Keanu Reeves, 42, who was born in Beirut, but raised in Toronto, made the list at No. 62; Transamerica star Kevin Zegers, 22, ranked No. 70, followed by Montreal-born diver Alexandre Despatie, 22, at No. 73.

Congratulations, gentlemen!
Posted by Matt Guerin at 11:21 AM
Email ThisBlogThis!Share to TwitterShare to FacebookShare to Pinterest