Exhausted and going a little crazy in these Covid times, but at least I now have my AstraZeneca vaccine appointment

I regret really letting health care officials have it with my last post.

Like all of you, I'm exhausted after a year plus of this pandemic.  The massive flaws of our species are on full display everywhere you look.

The only thing that gives me solace when I observe Dumpster Fire Ontario under the current provincial government is the fact that so many other jurisdictions have it worse.

Take most of America, which is thankfully finally using its superpower might under President Biden in the right ways and vaccinating the willing, despite the broken, misguided efforts of Republicans to undermine the recovery with their ideology.  Other countries like Brazil are in the worst of it, thanks to the deadly combination of the psychotic idiot they have as President and the 55% of the general population that voted for him in 2018, many of whom shockingly are still believing Bolsonaro’s lies and apologizing for him.

Compared to those places, Ontario has it good.  It could be far better, of course.  The Ford government should've taken the science seriously, protected people including our most vulnerable fellow citizens over maximized profits for the few.  But if they had done that, they wouldn't be a government led by Doug Ford, after all.  No doubt, Ontarians are waking up fast to the massive deficiencies of Dougie.  Was kicking out Kathleen Wynne really worth this?  Not for a second.

I lost it last week having to endure the technical torture of Unity Health's feeble booking site after waiting so long to become "eligible" for a vaccine here.  Then Ontario announced Sunday night that 40+ residents can get the AstraZeneca vaccine at pharmacies starting Tuesday.  And today, I'm thrilled to say I was able to find a pharmacy that would book me for one before the end of April.  I'm thrilled.  Thank you to everyone who helped me in this.  Fingers crossed that the appointment doesn't get cancelled or some other screw-up hinders my vaccination.

I'll look forward to my first dose and joining the ranks of the luckier.  It's true so many other more vulnerable people who have to put themselves in danger every day just to make a living deserve a vaccine sooner than I.  It's also true that Ontario shouldn't be in this bad a situation.  There's no excuse one year in for our provincial government to have made this many mistakes.  Doug Ford should resign now.

None of this is fair.  I'll try to reflect on that.  And remember to be kinder and appreciate more often the good things I do have.  And not forget we're all in this together.

Posted by Matt Guerin at 9:38 PM No comments:
Email ThisBlogThis!Share to TwitterShare to FacebookShare to Pinterest

I sent this message a few minutes ago to Unity Health Toronto, the alleged providers of health care in my Toronto Centre community.  I think it speaks for itself.

Comment: I just logged onto my three local vaccine clinic appointment booking links available through Unity Health as we've been told by your website and by local Councillor Kristyn Wong-Tam that new Covid vaccine appointments are opened up every Thursday at 7 pm.I used 3 different tabs to check each of the 3 clinics that are allegedly offering appointments now to 48 year olds in my Covid hot spot postal code M5B.  No appointments were available when I checked all three clinics at 6:45 pm (just like it's been all week). I stayed on the tabs, refreshed a few times, and kept checking and checking. 7 pm came and went.  No new appointments appeared.  There were no appointments period.   Despite being told pretty publicly that new ones would be added Thursdays at 7 pm.  I gave up at 7:31 pm.  There have been too many lies spread around during this pandemic. Our premier is a buffoon liar who has screwed up Ontario's response to this pandemic.  Other public officials have completely let us down too, from the federal government to local officials.   I'm disappointed to find out that Unity Health is now also providing false information and false hope out there to the public when we're desperate to be vaccinated. We don't need more lies.Shape up. If new appointments are to be added Thursdays at 7 pm but zero appear at that time, you are liars. Stop lying.

I logged onto their site tonight.  Unity Health will only book 7 days in advance.  Each day, the calendar moves one day ahead, and just minutes ago after midnight Saturday April 17, the 24th became available to be clicked on for the first time.   And wouldn't you know it - on all clinics, there are ZERO appointments available for the 24th already, even though it was impossible for anybody to select the 24th until 14 minutes ago.

This proves my point.  If anyone can possibly get through this bullshit Unity Health has put up as our only way to book a vaccine, it's a miracle.

Posted by Matt Guerin at 7:55 PM No comments:
Email ThisBlogThis!Share to TwitterShare to FacebookShare to Pinterest

Corrupt Doug Ford government siding with big business interests and hurting ordinary Ontarians on Covid, Highway 413 and most everything else 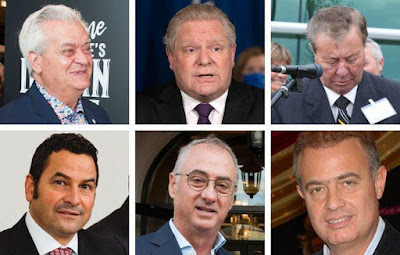 Considering Doug Ford and the Ford family's criminal history, is it any surprise that Ford's Progressive Conservative government would be up to its eyeballs in corruption?

This exhaustive investigation by the Toronto Star and National Observer lays bare the actions of the Ontario Tory government and its corrupt big business land developer friends since Ford's Tories came to office in 2018.

Reading it makes me angry.

"Eight of Ontario’s most powerful land developers own thousands of acres of prime real estate near the proposed route of the controversial Highway 413, a Torstar/National Observer investigation has found.

"If built, the road will raze 2,000 acres of farmland, cut across 85 waterways and pave nearly 400 acres of protected Greenbelt land in Vaughan. It would also disrupt 220 wetlands and the habitats of 10 species-at-risk, according to the Toronto and Region Conservation Authority.

"One developer, John Di Poce, employed the head of the Ontario PC party’s fundraising arm for several years and three other developers employ the chair of Caroline Mulroney’s 2018 PC leadership campaign as a government lobbyist. Mulroney is now Ontario’s transportation minister and will play a key role in future decisions about the 413 highway.

"Another of the developers, Michael DeGasperis, hosted Ford and PC MPP Stephen Lecce in a private luxury suite at the BB&T Center in Miami to watch a Florida Panthers’ NHL game in December 2018. In a statement, spokespeople for Ford and Lecce said both politicians paid for their own tickets to the game and no government business was discussed.

"That was shortly after the Ford government had resurrected the proposed 413 highway."

We've already seen the impacts of "unappealable" Minister’s Zoning Orders, or MZOs, in many parts of the province where environmental laws designed to protect us all, not to mention local rules, have been washed away in favour of fast-tracking whatever land developers want.

Now it looks likely the corrupt Tories are going to push forward with the unnecessary Highway 413, destroy acres of precious farm and wetlands, just to get their select corrupt big business developer friends even richer than they already are.

This is hard to swallow on top of Ford's mishandling of the pandemic, constantly favouring the worst instincts of big business against the health of all Ontarians - closing down too late and then opening up too early again and again as variants of Covid-19 rip through the province.  As more enlightened leaders like New Zealand's Jacinda Ardern have shown us, we needed hard lock downs early in order to keep case levels and community transmissions down.  Not in Ontario or other places like it governed by conservatives.   Ford kept hesitating despite his fake words, implementing half measures and sowing confusion, resulting in a tragic second wave and now an exploding third wave.  The new deaths that will occur because of his incompetence, as well as the lifetime health impacts for those who survive this third wave, are his responsibility.

Is there hope for the future?  Not as long as this pro-big corruption PC Party stays in power.  Even if Ford were somehow kicked out and replaced as PC leader, this is a party whose ties to the ultra-rich and corrupt elite in Ontario are unseverable.  For example, the ties between Caroline Mulroney and the forces pushing for Highway 413 are now obvious.  Let's not forget she's also the daughter of one of the most corrupt Prime Ministers this country has ever seen (and whose decision to sell off Connaught Labs in the 1980s undermining Canada's ability to manufacture vaccines really isn't aging well, don't you think?)

Under our pathetic electoral, winner-take-all system in which 59.5% of Ontario voters only received 39% of the seats (Ford's Tories won a 61% majority with only 40.5% of the votes), it can be disheartening for those who want just, equitable, fair government that doesn't merely do the bidding of corrupt big business.

What are our options?

The Ontario Liberals, to their credit, did do some good things in office from 2003 to 2018, including reject Highway 413.  But they also did a lot of crappy and corrupt things that have yet to be forgotten by the wider public.  Every time I try to add credit to my Presto card to take transit in the GTA, I'm reminded of the crappy deal the Ontario Liberals handed to commuters here.

New Ontario Liberal leader Steven Del Duca, who as Transportation Minister was happy to change official plans in order to benefit himself politically, doesn't seem like the tonic we need after Doug Ford's corrupt Conservatives.  Del Duca's ties to the same land development cartels are probably as strong as Ford's.  Still, perhaps he'll draw enough votes away from the corrupt Tories to deny the PCs a majority.

After the 2018 election, I was so disappointed with Andrea Horwath's defeat, I sort of gave up on her.  Yet, perhaps I was too hasty in that estimation.  Horwath remains as Ontario NDP Leader.  She's as clean and uncorrupt as any leader can get.  Maybe it is time for Horwath.  She's already gained so much ground, winning 40 seats and 34% of the vote in 2018, dominating urban areas of the province from downtown Toronto, parts of the 905, Hamilton, St. Catharines, Kitchener, London, Windsor and most of northern Ontario.   The road to power is a lot shorter for the Ontario NDP than it is for the decimated Ontario Liberals.  A government led by Horwath would put the corrupt interests currently controlling Doug Ford on the outside looking in.

That could only be good for Ontario, even if just for one term.  The definition of insanity is doing the same thing (voting Tory, voting Liberal) over and over and expecting a different result.  I'm thinking outside the box again.

June 2022 can't come soon enough.  I just pray and hope that Andrea Horwath puts in the work, hones a clear and compelling anti-corruption message and platform, recruits strong candidates in crucial ridings who look like cabinet ministers, not anti-poppy nut bars you wouldn't want to let babysit your kids.

Because without one strong option for change, sadly this corrupt present in Ontario will continue to be our future for many years to come.

This is more like it.   Too little too late?  For the sake of all of us, I hope not.