Honestly, I'm not missing Pride much this year

Perhaps I'm just older now and don't need the Pride festival to feel good about my sexual identity.
Perhaps I've long ago learned to party responsibly so the loss of a weekend filled with boozy parties and running around to the point of exhaustion is a welcome thing.
Perhaps I don't miss the crushing crowds packed into a handful of blocks along Church Street, the noise, the blocked off streets featuring too many sound stages that pound out forgettable music so loud the smart neighbours nearby leave town for the weekend, not to mention the garbage left piling up.
Perhaps the sight of non-LGBTQ food and street vendors taking over the streets to sell their fatty crap, who do this for every Toronto street festival without much actual care for the history of these communities, not to mention all the corporate floats and involvement that are really just mass communications efforts designed to sell you more you don't need.
Please don't get me started on the awful parade.  Not perhaps, but definitely the parade has become awful both to watch and in which to participate.  If you're gungho to participate in the parade alongside a political party or your local union (as I have in the past), the long wait in the hot sun at the staging area for the parade to finally start moving has been excruciating.   I remember waiting three hours in the heat to get moving after our rendezvous time in 2014 World Pride.  For others, it was even worse that year.  Of course, once you get moving, seeing the cheering crowds and waving can be fun.  But alas, it's also fleeting as the crowds become a bit of a blur.  Pride parade organizers still seem after all these years to have little idea how to efficiently run parades.
I haven't watched the parade comfortably from the sidelines in decades because it's almost impossible along the narrow Yonge Street route to get a good view amid the horrendous crowds.  Plus one half of the street will typically be covered in steaming sunlight as it's an afternoon parade, so without sunscreen it can be unhealthy.  I did try to watch in 2016 with visiting family when we found a spot on Yonge south of Carlton that provided a bit of a glimpse of those in the parade.  But alas, that was the year Black Lives Matter held its sit-in a few blocks north of us, grinding the parade to a halt.
In retrospect, I admire Black Lives Matter activists who bravely pushed their agenda that day.  It raised awareness in ways few other actions could.  It reminded us all that Pride is political, that Pride was based on acts of protest.  Demanding armed and uniformed police officers be absent from the parade went a long way to helping the marginalized in our community find their place again in this event.
But it's still a noisy mess.
I do miss the excuse to see friends I haven't seen in weeks or months.  I miss the traditional house parties that won't happen this weekend.  Sure there'll be other weekends in the future.  Here's hoping that vaccines against Covid-19 eventually make communal life possible again.
Pride weekend this year has been unusually restful and quiet.  I've done some reading.  I've done some awesome cycling.  I've done some planning for my next project.  I've watched Rupaul's latest All Stars episode with a close friend.  Today, there are no calls to come join some parade and wait around in the sun for 3 hours.  It'll just be more reading, a bit of writing of this blog, probably more cycling, a phone call with an old friend tonight, and perhaps some virtual Euchre with some other dear friends.
A quiet, lovely Pride indeed.  It takes a year like this to remind us that much of the chaos and noise that Pride has become isn't really all that appreciated.  How did this beast get so big and corporate and manic?
Why must Toronto be stuck with the existing Pride structure - shutting down the narrow corridors of Church Street, with its long waiting lines to get into bars or the boarded off outdoor events?  Why can't we have the parade in the evening when it's cooler?  Why does it have to be Yonge Street?  Why can't we take over a different location like a park and give people the space to attend?  With Covid's impact possibly lasting years, that may indeed force a much needed change.
We'll see.  I may even have to join Pride Toronto again and try to advocate for change.
But for today, all I will do is enjoy the quiet this year, knowing there's no party to miss.
Posted by Matt Guerin at 12:44 PM No comments:
Email ThisBlogThis!Share to TwitterShare to FacebookShare to Pinterest

The shortcomings of Donald Trump and neo-conservatism on full display thanks to Black Lives Matter and recent protests against racism... 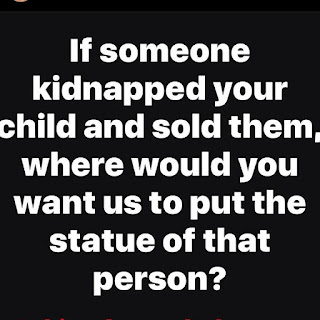