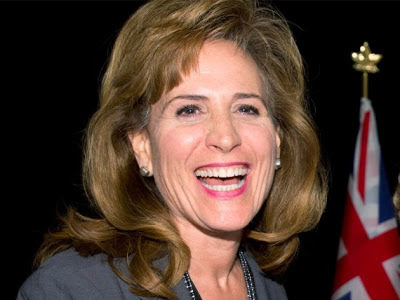 After much thought and watching the candidates in action over the last few weeks, I'm going to follow my head and my heart and endorse Sandra Pupatello for Ontario Liberal Leader and Premier.

I've liked Sandra for years. She's got great personality, spunk, energy, communication skills and amazing drive. She's handled some of the most difficult portfolios well in government including Education and Economic Development. She also played a key role as a fighter during her years in opposition, helping to transform a shattered Ontario Liberal Party into a governing force as Deputy Leader.

I find her the most compelling personality in this race. She's always struck me as gay-positive. I know for a fact she was a good friend of the late Dominic Agostino (who was elected in 1995 along with she). In recent weeks, I have been considering the strengths of Gerard Kennedy and Kathleen Wynne as well as Pupatello. The rest in the race have thus far failed to impress me much at all (although I do see great promise in Eric Hoskins, I just don't see it happening for him this time.)

Kennedy has been running for Liberal leader at either the provincial or federal levels for 16 years. I supported him in 1996 for the Ontario leadership. In 2006, his oft monotone delivery and vague promises of renewal failed to impress and drove me into the arms of Stephane Dion (in hindsight, my inability to get over Bob Rae's shallow credentials as a Liberal proved to be a big error.) Today, Kennedy's sudden return to provincial politics has many scratching their heads. His message in this campaign has been somewhat effective with him positioning himself as the rebel candidate who has been the most removed from the McGuinty government's recent failings. Still, Kennedy's Toronto roots would be a tricky sell outside of the GTA. His left-of-centre politics may also not be quite what the province needs at this point. We shouldn't forget that the Tories still form the greatest threat to Liberal rule, not the NDP. While I'm sure Kennedy might be able to win back some teachers' hearts and possibly push support for the NDP back down a bit, I'm not sure how well he'd do against the Tories. I still get frustrated by his dry delivery during debates or in interviews, although he is better than in 2006. I could be completely happy with Kennedy as leader and I'm sure he'd make a strong go of it were he to win the leadership. I've been waiting to be impressed by him in this race and it hasn't quite happened yet. I'm starting to believe it's simply not going to happen. Part of me also loves the idea of electing a woman as premier and I can't help but suspect I'd be somewhat disappointed if Kennedy were to prevail over his two amazing female opponents in this race.

Kathleen Wynne would be my third choice for leader. She's got so much respect from her colleagues and she's also clearly an amazing person. I like the idea of Ontario's first openly gay leader and premier, as I do love the idea of Ontario's first woman premier. But I do think that Wynne being a left-of-centre lesbian from Toronto would be an even harder sell outside of the downtown core than Kennedy. This is quite unfair, I know. She's got amazing talent. I was waiting to see if, unleashed from the constraints of cabinet, Wynne would start to show a strength of personality so compelling that she would simply cancel out all of the obvious negatives. I haven't seen that yet. Furthermore, as a member of the cabinet until recently, she'll wear all of the recent scandals and spending mishaps that have plagued the government the last year. She's a good candidate, but I fear a Wynne-led Liberal Party would probably fail to win a mandate in the next election and usher in a very unfortunate Tory government under the regressive Tim Hudak.

Which brings me back to Sandra Pupatello. From Windsor, Ontario, she hails from a part of the province where Liberal support fell the most in the 2011 election. If she wins, she'll run in Windsor again. That can only help in rebuilding the party in that region. Ontarians seem to prefer their premiers to come from outside the Toronto area. Valid or not, there is a sense outside the GTA that Torontonians are inward-looking and don't know or care enough about life outside the big city. Any leader from the city of Toronto or even from Mississauga is going to suffer from this kind of mistrust. It's why all the parties in Ontario seem to prefer non-Toronto leaders.

If she wins, Pupatello's primary focus on "jobs" and "economic growth" will be music to the ears of Ontarians who are deeply worried about the economy and our province's massive deficit. I think she's going to strongly connect with not only the Liberal base in and around the Greater Toronto Area, she's also going to impress many Ontarians outside this region as well. Not only would Pupatello be the province's first woman premier, she'd also be the province's first Italian-Canadian premier. We would finally break the anglo-male mold for leadership in Ontario. As a former Education Minister, she's as well-positioned to re-build relationships with teachers as either Kennedy or Wynne.

Once Ontarians get a good look at Premier Sandra, they'll find they like what she has to offer and I think be inclined to give her a shot at turning the Ontario economy around with a renewed electoral mandate. More than any other candidate in this provincial leadership race, Pupatello is the one with the winning combination of likeability, credentials and communication abilities that we need at this time.

Posted by Matt Guerin at 10:13 PM No comments:
Email ThisBlogThis!Share to TwitterShare to FacebookShare to Pinterest 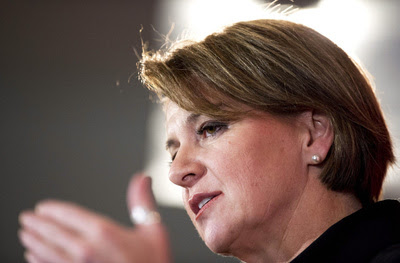