This is how all hot straight actors should react to the affections of gay men, I must say. Good on Daniel Radcliffe, who's finishing up his successful and fully nude appearance in Broadway's Equus in a couple weeks.

Here's an excerpt from the Daily Beast interview:

"Q: What’s it been like working in the small bower world of the theatre? It’s a very different environment than film. Much more collegial and camp and...well, let’s face it...gay.

A: And for a lot of straight guys—and I know I’m guilty of it sometimes—when you know a gay guy has a crush on you it is the most flattering thing.

Q: Forgive me, but to be politically incorrect here, I’ve seldom met a straight actor who is not a “fag hag.” Are you?

A: Oh, yeah. I know I definitely caught it. Absolutely. My mom was a casting director and my dad was a literary agent and I was surrounded by gay men from a very young age. And I was the only boy in my class at school who had that kind of relationship with gay men. Most of my friends had parents who had proper jobs in banks and law firms so none of them had been exposed to homosexuality in the way I had—as a normal course of things. So they had a rather different attitude toward it than I.

Q: They’d just bugger each other.

A: Well, I didn’t go to a boarding school if that’s what you’re getting at. That’s one thing Harry Potter has done if nothing else. It has restored the reputation of the English boarding school. It has made it something other than a hotbed of homosexuality."

Not that there's anything wrong with hotbeds of homosexuality...lol 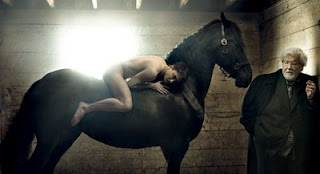 It appears that Daniel's co-star Rupert Grint also seems eager to shed his clothes for art...
Posted by Matt Guerin at 8:45 PM
Email ThisBlogThis!Share to TwitterShare to FacebookShare to Pinterest