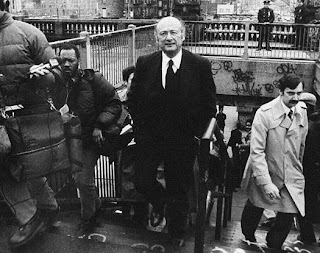 Closet case! Coward! We've heard all these words today and long before to describe Ed Koch, who served as New York City's mayor during the 1980s.

According to the folks who made the 2012 documentary "How to Survive a Plague", his "callousness...at the very epicenter of the AIDS crisis...failed," so many even as it ravaged thousands of gay men just like him. Koch was apparently gay but never admitted it publicly. The best we got, when once asked about his own sexuality, was the following: "My answer to questions on this subject is simply, 'Fuck off.' There have to be some private matters left."

He took that official secret to his grave when he passed away earlier today.

I came of age just after the worst of the AIDS crisis. But that terrible decade in 1980s remains in our collective memory. It's true that Koch could've done much, much more to help combat the disease in those early years, provided more help to those struggling to survive and help others fight the disease. It was an epic failure of leadership from somebody who should've known better.

Regardless, I hope he rests in peace. This clip below from the feature film 'Shortbus,' by director John Cameron Mitchell features an elderly male character who is clearly based on Koch. Not seen in this clip, the character introduces himself to the young man as a former "mayor" of New York City and proceeds to try to explain away his terrible record on the issue. It's quite moving and worth a watch (as is the entire movie if you haven't seen it yet.)

For more on Koch's record on gay issues, read this Huffington Post article or this new piece out Feb 4, 2013 by Michelangelo Signorile.

Posted by Matt Guerin at 11:45 PM
Email ThisBlogThis!Share to TwitterShare to FacebookShare to Pinterest

hi Matt...I rather like what Larry Kramer had one of his characters in the Normal Heart say about Koch:

The only way to get the mayor’s attention was to “hire a hunky hustler and send him up to Gracie Mansion with our plea tattooed on his cock.”

So yes, rest in peace, but no sympathy from me...