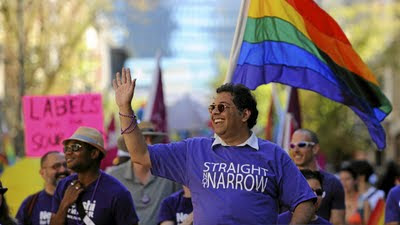 Progressive, decent folks in Toronto are looking west to Calgary today with a bit of envy at news that city's mayor, Naheed Nenshi, led today's Gay Pride parade (pictured).Torontonians hardly knew the idea that a mayor would actually exert a bit of effort to be the mayor of all the people was something one election could erase; yes, today in Toronto we have a horrific example of democracy gone bad with a mayor more interested in ripping the shit out of the city and selling public assets to his private sector friends, all the while his red-necked, idiot base cheers.

Oh, dark days, please end soon. And let that first sign come October 6th when we reject the third horseman of the Conservative Apocalypse, goofy Tim Hudak, and re-elect a Liberal majority government (yes, that is my prediction for the Ontario election on the eve of the vote call.)
Posted by Matt Guerin at 9:04 PM
Email ThisBlogThis!Share to TwitterShare to FacebookShare to Pinterest