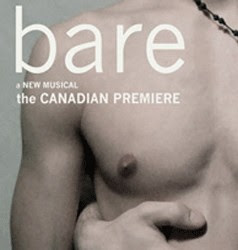 I had the chance to take in the great production of 'Bare, The Canadian Premiere' this weekend at University of Toronto's Hart House Theatre, which chronicles the secret affair between two closeted Catholic schoolboys. (FYI, despite its title and provocative poster, this musical features no nudity, nor does it need any.)

I'm proud to say the musical, first performed in Los Angeles in 2000, was exceptional, entertaining, sweet, romantic, tragic, touching and occasionally sexy. The musical nails all the hidden contradictions of Catholic youth, from the unnerving guilt to the wild and secret partying. My own Catholic public high school was very similar to the private one depicted on stage. I never had an affair with a hot schoolmate, mind you. My personal repression was so strong I never told anyone about my homosexuality until I was safely ensconced within a secular university.

While the musical hits many familiar notes often seen in gay melodrama (love triangle involving a sweet, but clueless girl, an unsupportive mother, etc.), there are still a few surprises. And the Toronto cast never fails to impress, bringing much zest to their roles, particularly the two leads, Wade Muir and Graham Parkhurst. Standouts among the ensemble include Nichola Lawrence as Sister Chantelle (the nun every Catholic gay boy wishes they knew in high school), Renee Stein as Claire, Muir's mother, Alison O'Neill as Ivy, Parkhurst's girlfriend, and Claire Rouleau as the particularly hilarious nerd Nadia.

Wade Muir has a great voice as Peter, the lead, but the better actor is Graham Parkhurst as Jason, his closeted lover. I wasn't impressed with Parkhurst's voice in Act One; luckily he seemed to be saving his energy for the more dramatic and tragic Act Two, in which he excels. Muir and Parkhurst make tender and believable lovers and they don't shy away from the script's considerable affections. Be prepared for many wet audience eyes after the curtain falls at the end.

The Canadian premiere is being produced by WatersEdge Productions Inc, and runs until this Saturday August 1st. If you have the chance to check it out before then, I highly recommend you do. Tickets are available here.
Posted by Matt Guerin at 1:05 PM
Email ThisBlogThis!Share to TwitterShare to FacebookShare to Pinterest