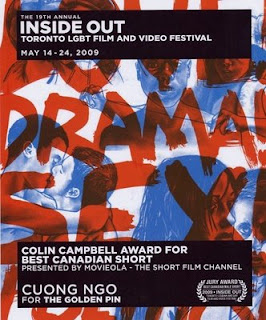 Last night, the short dramatic film I co-wrote and helped produce, The Golden Pin, by Toronto director and my dear friend Cuong Ngo, won the top short film prize at Toronto's Inside Out LGBT Film & Video Festival, the Colin Campbell Award. All of us who worked on the film are enormously humbled and thrilled to have achieved this accomplishment. I want to thank all of my friends, family and colleagues who have given us much support and love during this incredible week!

This marks the beginning of the festival run for our film; we have 10 festival submissions pending, including two in Toronto later this year. Plus many, many more to come. Stay tuned. Below is the press release we issued today:

"I'd like to thank my team for everything. Without them, we can't go together this far," says Cuong Ngo. "It's such a great collaborative work. I'm so glad to prove to the world how strong my love is."

Ngo also thanks his professor and mentor, Canadian director John Greyson, as well as the rest of the faculty at York University’s Film Department, who provided Ngo with much support and advice during the production of The Golden Pin.

The jury award comes with a $500 cash prize, which Ngo intends to donate to the AIDS Committee of Toronto. "My dream is to make people happy and help people. Now, my dream came true and I wanted to offer this prize to the community."

The Golden Pin screened during Inside Out's Hogtown Homos showcase on May 20th at the Isabel Bader Theatre in Toronto, ON. Many more festival screenings are planned, with pending submissions across Canada, the U.S. and the rest of the world. Together with producers Igor Szczurko, Matt Guerin and Tom Yarith Ker, Ngo's in the development phase of adapting The Golden Pin into a feature film.

Additional information and bios of the filmmakers and cast are available online at www.thegoldenpin.com

Born in Saigon, Vietnam, he graduated at the Cinema and Theatre University of Ho Chi Minh City, BFA (02) before pursuing his second degree in Film Production at York University in Toronto, BFA (09). Cuong directed 2 award winning short comedies in the years of 2003 and 2004 while studying Writing and Linguistic at International Royal Melbourne Institute of Technologies University. Cuong has also directed short films, documentaries and video arts such as: Oops! (06), The White Day (07), Dana (07), Visual Poetry (08), The Hitchhiker Project (08), Cultural Anthropology, National Identity through Ukrainian Dance (08). Cuong Ngo's The Hitchhiker Project (08) was officially selected for presentation at numerous International Film Festivals. His most recent film The Golden Pin (09) world premiered at the Toronto Inside Out Film Festival in May 2009. Together with producers Igor Szczurko, Matt Guerin and Tom Yarith Ker, he's in the development phase of adapting The Golden Pin into a feature film.
Posted by Matt Guerin at 7:22 PM
Email ThisBlogThis!Share to TwitterShare to FacebookShare to Pinterest

That is really excellent news.

It is so good to see your efforts recognized.

Congratulations, Matt! I'll definitely be keeping an eye out for it. Any chance it'll be at image+nation this autumn?

Thanks, Mark. Actually yes we plan to submit to Montreal World and image+nation. We're just going through a long list of possible festivals, but Montreal is definitely high on our list.