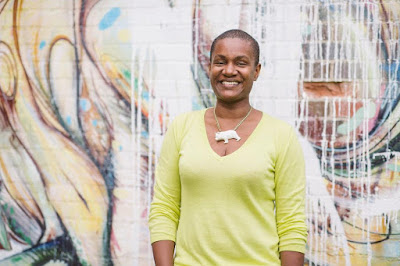 I've been a Liberal most of my life.  At one time, I was even employed as a backroom Ontario Liberal.

But on occasion, usually for strategic or personal reasons, I've voted for the NDP, like I did somewhat reluctantly in the 2018 provincial election as it seemed the best way to stop Doug Ford's PCs.

In the 2019 federal election, I even voted in my riding of Toronto Centre for Green local candidate Annamie Paul (pictured).  In fact, that followed me voting for her nomination as the Green candidate as well.  I joined the Green Party on a lark that year to see what things are like in that party.  To my pleasant surprise, I found a local nomination meeting in which ordinary members had control over the proceedings, including a unique question and answer session with the prospective candidates.  That experience contrasted massively with the sardine-style Liberal nomination meetings I've attended in the past, in which candidates' speeches are usually of almost no consequence as hundreds of instant Liberals are typically recruited and brought into meetings long after the speeches are done to decide the results.  That is, of course, if local members are allowed a vote at all on their local Liberal candidates.

Paul won that federal Green nomination in Toronto Centre in 2019 after greatly impressing local Green members with her eloquence, considerable experience, and charisma.   Later that year in the election, she managed to do slightly better than the Ontario average with 7% of the vote against 58% for Liberal Bill Morneau in the typically Liberal stronghold.  I didn't renew my Green membership this year and didn't take part in this 2020 leadership race.

But I'm not surprised at all that Annamie Paul's considerable strengths as a person and a politician translated into her victory as the new federal Green Party leader yesterday.

Bill Morneau's sudden resignation in late summer as Finance Minister and Toronto Centre MP has led to the quick by-election in the riding set for October 26th, just over three weeks from now.  Paul had already won the local Green nomination again for the by-election, but now will be running as the Green Party leader.  That ensures the 2020 by-election will be much different than 2019.

I never had much respect for Bill Morneau's political skills.  His retail and communication skills as Minister of Finance were weak.  Furthermore, I had always resented how Morneau had been parachuted into Toronto Centre with the decks stacked in his favour by party central, despite living elsewhere and clearly being out of line with the more modest demographics of the riding.  He would've been better suited in a suburban riding, in my opinion.   I voted for Annamie Paul in the 2019 federal election mainly as a protest against Morneau locally.  Had I lived in most other ridings, I probably would've voted Liberal in 2019.

Toronto Centre has enormous social and economic problems.  The crisis of housing and homelessness is reaching new heights this pandemic.  I've always wanted a strong, local leader to step forward who will prioritize the urgent needs of the people who live here, not view the riding as a stepping stone to advance their careers.  Sadly, the Liberal Party keeps on appointing star candidates from afar as our local candidate.

Such is the case again with the appointment of Marci Ien, a high-profile broadcaster who used to co-host Canada AM on CTV.  Ien seems smart and accomplished, but doesn't live in the riding.  Her strongest local connection may only be having attended Ryerson University back in the early 1990s.

But with local resident Annamie Paul's victory as the new Green Party leader, I must say that the decision for me is now clear: I will be voting for Paul in this by-election.  Furthermore, with the Green Party leader now on the by-election ballot, this will sway a huge number of Toronto Centre voters to also support Paul.

It remains to be seen if the NDP and the Conservatives will offer Paul the courtesy of not contesting the by-election.  In the past, when party leaders have attempted to win seats in by-elections, opposition parties have sometimes stood down and not challenged them.  The Greens did that for Jagmeet Singh in 2019 by not contesting his by-election fight in Burnaby, BC.  So far, the NDP has said it will re-run its local NDP candidate Brian Chang in Toronto Centre on Oct 26th.  That decision alone will make victory more difficult for Paul.

But we will see how the next three weeks go.  There is virtually no door-knocking or hand-shaking going on in this by-election.  Phoning and emailing is of course happening.  With the new, very eloquent and clearly intelligent Green leader contesting the by-election, we can expect a surge in media interest which will give Annamie Paul more publicity and focus the minds of by-election voters.

By-elections tend to have poor turnout at the best of times.  It's entirely possible that Paul will be able to pull off a historic by-election win in Toronto Centre to follow up her historic Green Party leadership win.

Paul is impressive and it would be ideal to see someone of her caliber win a seat in the House of Commons.  That would advance the cause of the environment at this crucial time, without really changing the make-up of the federal government.  That, to me, would be far more significant a result than adding yet another Liberal backbencher to the federal Liberal caucus, even though I do have great respect for Marci Ien.