As Alberta retreats into bad conservative habits under Jason Kenney, PEI may show us what real change looks like

There isn't much positive to say about the gross Alberta election results this week.

The voters of that province are generally much more conservative than other Canadians and they stayed true to those inclinations this week.  The Alberta NDP's election in 2015 was a unique event that took place simply because they were the only viable option that year to boot out the old Progressive Conservatives, who truly deserved it.  The NDP was abetted that year by a divided conservative vote, when 52% of the right-wing vote was split almost down the middle, allowing the NDP's 41% to translate into a majority government.

There's no doubt that Jason Kenney is an effective politician.  Many thought he'd run to succeed Stephen Harper as leader of the federal Conservatives.  But after 2015, he may have (correctly) deduced that Justin Trudeau would be hard to beat in 2019.  As such, Kenney changed focus and left federal politics for Alberta where he united the two provincial right-wing parties there into one, the United Conservative Party (or UCP).  The result was a provincial victory this week, in which the UCP took 55% of the vote, while Notley's NDP receded back to 33% (still a huge level of support for the NDP in that province, which averaged around 10% support in the 20 years prior to Notley becoming leader.)

Like the federal Conservative Party that Stephen Harper helped create, the conservative union was and continues to be somewhat awkward, putting people who hate LGBTQ people and non-white people in the same tent with people who don't.

Notley hoped that by reminding socially liberal conservatives of the bigoted positions taken by Kenney and many others in the UCP in the past, they'd wrest those votes back to the NDP.  But as always with the NDP, it was a bridge too far.  Too heavy was the weight of dissatisfaction with the NDP's economic record.

It's sad that bigotry is not much of a deal breaker for most socially liberal conservatives.  On every issue that's ever mattered to LGBTQ people, Kenney has always sided with the bigots.  His election this week was a clear declaration by a majority of Albertans that LGBTQ people just don't matter that much to them.  Or at least not as much as some vague notion of "fiscal responsibility" and "economic growth."

The irony is biting, of course.  Kenney has a strange personal history that's been largely ignored by the mainstream press in Canada.  Years ago, he professed that he'd remain a virgin until married.  And of course, he remains unmarried today.  Like many, I've long suspected that he's really a closeted, self-hating gay man who put his devotion to his Roman Catholic faith ahead of even himself.  The whole thing is such a gross throw-back to yesteryear, when gay men lived deeply sad and closeted lives.  Kenney seems to have whittled off a major portion of his life based on the false belief he must in order to save his soul.  All the better if doing so, in his mind, is the only path to unfettered political success.

It's gross to watch Kenney's contortions today pretending to have "evolved" on LGBTQ rights from the time 30 years ago when he campaigned against same sex spousal hospital visitation rights in San Francisco.  The best part of this election campaign was Charles Adler's scorching interview when he took Kenney to task for that history.  LGBTQ people know well that the biggest homophobes are usually closeted homosexuals themselves.

So now Albertans have ignored all of this oddness and embraced this man as their new spokesperson.  Good luck with that.  Personally, I'll be muting the television every time Kenney appears on it, as I have done previously.  This is not a person who can speak with any authority on anything that matters to me, that's for sure.  If Albertans thought they'd elected a champion who will shake up eastern Canadians into supporting their big oil agenda, they are sadly mistaken.

Despite this depressing turn of events, there is reason for optimism this weekend for progressive political junkies in Canada.

Prince Edward Island goes to the polls on Tuesday.  And it seems that it may be far more historic and interesting than anything Albertans did last week.

The Green Party seems poised for a historic victory, which would probably be the first time in the world this has ever happened.  That's what I'll be hoping to see.
Posted by Matt Guerin at 4:07 PM No comments:
Email ThisBlogThis!Share to TwitterShare to FacebookShare to Pinterest 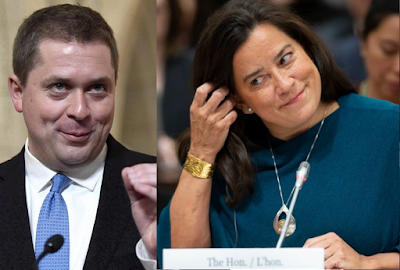 In the latest twist in the ongoing SNC-Lavalin scandal, former Trudeau government Attorney-General Jody Wilson-Raybould has shocked the nation again by confirming she now plans to challenge Andrew Scheer for the leadership of the Conservative Party.

The revelation emerged after Sun Media reporters discovered a hidden statement she wrote deeply embedded within a 727-page report tucked into an envelope marked "Highly important intellectual stuff" and anonymously slipped under the front door of the Toronto Sun last week.

The first 562 pages of the report rehashed various statements and allegations already made by Wilson-Raybould or her Liberal MP colleague Jane Philpott, some of them copied and pasted over and over for chapters on end.

The explosive new statement appears starting on page 563.  It took over a week for Sun reporters to read that far and discover it.

It reads as follows:

"I, Jody Wilson-Raybould, have done my part stabbing Justin Trudeau in the back and the front over and over again for weeks.  It's been extremely enjoyable."

"It's true on the surface once the average person sifts through the pages and pages of partisan bullshit and hyperbole that's fronted for news coverage related to this scandal, it doesn't seem like much really happened here.  Some might think that this was merely two people disagreeing with their boss, and rather than act like team players in a high stakes environment, we decided instead to burn the house down in an election year.  Jane Philpott and me, of course.  But that's not what happened.  We had good reasons for burning the house down.  There were really, really bad things going on behind the scenes at the highest levels of our government and I'm hesitant to talk about them in public.  But trust me, there's a lot of nasty things happening that Canadians need to know about.  And one day, when I write my autobiography, I'll finally tell them."

"But I know that's a long time to wait for answers.  So let me answer one question now.  Some people have asked me if my attacks on Justin Trudeau were just part of a big plot to seize the leadership of the Liberals.  But please, why would I be doing all this to hurt the Liberals if I hoped to lead that party?  I'm not stupid."

"No I have different ambitions, I have to say! Today, ladies and gentlemen, I'm very proud to announce that I'm running for leader (PAUSE FOR IMPACT)...of the Conservative Party of Canada!  Sure the leadership isn't vacant at the moment, but so what?  I'm running anyway."

"Andrew Scheer has been a great ally and friend throughout this scandal.  Where Trudeau offered me nothing but very, very, very inappropriate pressure, Andrew has offered me a friendly boyish smile.  But the last few weeks have taught me that you need more to win an election than a nice smile.  Canadians want more than that.  I know in my heart they want someone else to lead the Conservatives into the next election.  And I submit today that person's initials are "J-W-R."

"Let's face it: I've done more damage to Justin Trudeau and the Liberals in just a few weeks than Andrew Scheer has done in two long years.  He's a dud.  He's got to go."

"I'm calling on Andrew Scheer to step down as leader immediately.  And I'm calling on all Conservatives to embrace me as their new leader."

When contacted to confirm the veracity of the statement hidden within the report, Wilson-Raybould replied by email: "It is all true."

When asked if she plans to quit the Liberal caucus now and join the Conservatives, Wilson-Raybould responded:

"I'm running to be a different kind of leader, one that bridges the historic divide of right and left in this country.  I intend to keep my seat in the Liberal caucus as the MP for Vancouver Granville.  I'm going to be the first person to win the leadership of one party while still sitting in another party's caucus.  That's how incredible I am."

Attached to the same page in the report as the speaking notes announcing the leadership bid was a yellow post-it note which reads:

"Great work! I read it last night.  Try practicing this in front of the mirror over and over, you can do this, you are awesome!  Best, Warren."

When confronted by reporters at a Yellow Vest rally about Wilson-Raybould's leadership challenge, Andrew Scheer looked like a deer caught in headlights.  After a few seconds of stammering, his eyes turned red with hatred.

"This is an attack on freedom!  Never before in the history of our country has someone been so unfairly treated as I have been today.  You can't believe a word she says.  Jody Wilson-Raybould is a menace to this country, she will destroy our economy and will bring the entire planet to complete destruction.  She must be stopped and only I can stop her," said Scheer, who then darted away from reporters.

When contacted about this latest revelation and if Wilson-Raybould will be allowed to stay in the Liberal caucus while seeking the Conservative leadership, Prime Minister Trudeau’s Issues Management department wouldn't comment but promised a response "within seven to 10 weeks."

“We’re still thinking about how to respond to Wernick’s phone transcript thing.  We can only do one thing at a time.  We’ll put this on our list of nice-to-dos.  We're not making any promises, but stay tuned.”