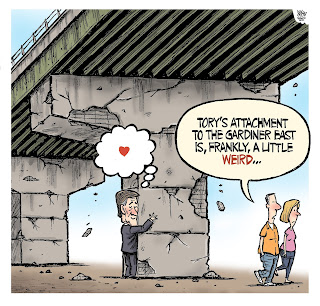 I like Toronto mayor John Tory as a person.  He seems decent enough and hard-working.  He's come a long way since the nasty backrooms of the 1993 federal election and even his first run as a politician in 2003, when he placed a strong second to David Miller in the race for Toronto mayor.

He's learned a lot about how to play issues and sound intelligent and fair, even when he has no intention of being so when the cameras are turned off.

When I hear Tory talk, I've often found myself unsure if I support or oppose what he's saying because his style is to be all over the map, vacillating around most issues, sometimes within the same sentence.

Tory is often well-meaning, but he lacks follow through and the fortitude to implement a good policy in the face of irrational resistance.  As mayor, Tory has played it safe and often taken the easiest way out of a policy choice.

I was thankful to Tory for getting rid of the Fords from the mayor's office in 2014.  I voted strategically for him then.  But in 2018, Toronto needs better.

Our city's growth is out of control with not much of a plan I can see for making it sustainable and ensuring public services keep up with that growth. It is now common to see school board signs at new condo developments warning potential buyers their kids will likely have to be transported far away to attend a public school.

Too many pedestrians and cyclists continue to die on our roads in a city filled with entitled, reckless motorists who still consider most downtown streets as their personal highways.  The city's Vision Zero plan has not been supported enough by John Tory, who instead prefers to side with regressive suburban councillors on most road issues.

I'll admit his support of the King Street Streetcar pilot was good, but it struck me as more calculated (to win downtown progressive votes in the face of a possible Doug Ford run for mayor earlier this year) than sincere.

Tory's decision to champion spending an extra $500 million to rebuild the crumbling eastern Gardiner Expressway is the kind of foolish capitulation to suburban drivers that we've seen from many previous mediocre mayors like him.  When it comes to placating privileged motorists, no expense can be spared, it seems.  So much for fiscal conservatism. (Let's also not forget that Tory truly believed the Gardiner East should be torn down, but flip flopped as mayor when he had the chance to follow through.)

We desperately need a transit system that is comprehensive and serves all parts of the city well.  But there's little chance of that happening under John Tory who's more interested in salvaging whatever he can from his failed Smart Track proposal than building such a network.

I've been impressed with Jennifer Keesmaat in this race and I've already voted for her in advance polls.  She is someone who knows city planning and city building in her bones and is a bold fighter.  I was thrilled that someone deeply credible got into the race to challenge Tory.  It says a lot that Toronto's city planner decided to run against her former boss.

All of Keesmaat's proposals strike me as well-thought out and based on firm principles that will lead to a much better Toronto.  Plus she seems tougher than Tory and more capable of implementing her policies than he has ever been.

But alas, if the polls are correct, Torontonians seem contented with the complacent, wishy washy style of John Tory in the mayor's chair.

I hope that doesn't come to pass.

We get the leadership and government we deserve.

If John Tory wins Monday, I can only say this to those who support him:

Over the next four years and beyond, when you're stuck in a massive traffic jam downtown because too many people still opt to drive cars as good transit alternatives don't exist, or when you're crammed into a bus or subway platform waiting, or dodging reckless taxi cars on your bike, or worse yet mourning the death of a loved one who was run down by a speeding motorist on a residential street, remember we brought this on ourselves.

And sadly we all have to live with it.
Posted by Matt Guerin at 4:09 PM
Email ThisBlogThis!Share to TwitterShare to FacebookShare to Pinterest