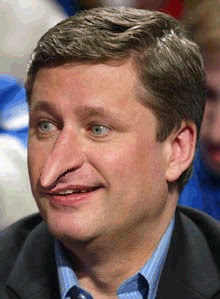 Stephen Harper has no shame.  He's willing to say anything as long as it conforms to his narrow-minded and often dangerous worldview.

Clearly, facts are irrelevant to him.  Today, we got Harper's latest dose of what I'll call "verbal liarrhea." Expect many more posts on this subject in the days and weeks ahead.

I'd like to credit CTVNews.ca for the amazing breakdown of Harper's lies today, which I've quoted extensively below:

Harper lie #1:  “Most Canadians (when) you actually ask them, do not want the full legalization of marijuana.”

Reality:  A 2014 survey by Angus Reid Global found that 59 per cent of the 1,510 Canadians surveyed supported legalizing marijuana and 41 per cent were opposed.

Harper knows full well his statement today about Canadian support for legalization was a lie because his government ordered the poll that showed massive support for either legalization or decriminalization.   Only 14% of Canadians support Harper's position.   Yet, he's willing to ignore Canadians' views on marijuana and instead is now promising to spend millions more on his failed war against drugs.

Harper lie #2: “I think the statistics in places like Colorado are very clear on this. When you go down that route, marijuana becomes more readily available to children.”

Reality: Marijuana has only been legal in Colorado since Jan. 1, 2014, so extensive research has not been conducted.

However, drugs have been decriminalized in the Netherlands since 1976, and past-year cannabis use among young Dutch citizens appears to be declining. Among those aged 15 to 24, past-year use dropped from 14 per cent in 1997 to 11 per cent in 2005, according to a study in the journal Addiction.

Harper lie #3:  Today on safe injection sites, Harper said, “Providing programs that do not provide treatment, in our view, is just throwing away the key and writing off somebody’s life. Trying to manage their decline, that’s not what we want to do. Our anti-drug strategy is based on prevention, enforcement, but most of all treatment.”

Reality: Insite does, in fact, provide addictions counselling in the hopes that users will opt to enter the on-site detoxification program, which is the first step in treatment.

Studies published in the journals Addiction and the New England Journal of Medicine have shown that Vancouver opiate drug users were more likely to enter detox programs after Insite opened.

Harper lie #4: "I am delighted to see, quite frankly, that our refusal to co-operate with the imposition of this tax is making it more difficult for the Ontario government to proceed," Harper said today, claiming it would be bad for the economy for ordinary Ontarians to have enough money to survive and feed themselves during retirement.

Reality: First of all, Harper is a hypocrite.  He's forced thousands of civil servants in Ottawa and across the country to pay higher payroll deductions for their defined benefit pension plans in recent years.

Secondly, pension savings are not taxes.  That's a big lie pushed by Harper and his allies in the corporate media.  The government doesn't touch those savings; they go into an independently managed, defined benefit pension plan and earn value over time.  When we retire, we reap the benefits.

The great horrific truth is that Harper simply doesn't really care much about ordinary Canadians and their retirement savings.   If he did, he'd support increasing CPP contributions now for all and not force us to wait until age 67 to collect our Old Age Security, as he's planning to do.

Ordinary Canadians without defined benefit pensions have no good options for reliable savings.   The only plans that provide great potential earnings are RRSPs, but they aren't reliable and can collapse in value, like they did during the great 2008 Wall Street swindle.   Some employers do match monthly contributions to group RRSP plans; however, again there is no guarantee of payouts during retirement.  Only a hope and a prayer.   In decades past, the private sector did provide better retirement options to their employees with defined benefit pensions.  But those pensions are long gone and the result is now a major crisis, particularly with our aging population.

Kathleen Wynne's plan to enhance the CPP is much needed.  Harper's opposition is despicably short-sighted, much like most of his decisions.

I hope we see past Harper's big lies this campaign and kick the thug out on his ass where his verbal liarrhea won't hurt us anymore.
Posted by Matt Guerin at 10:40 PM
Email ThisBlogThis!Share to TwitterShare to FacebookShare to Pinterest