A very good friend of mine, director Ashley Monti, recently shared with me a copy of her new short dramatic film called 'The Divide.'  The short film chronicles the efforts of armed, quasi-vigilantes who patrol the U.S.-Mexico border to try to stop illegals from entering America.  Here's the trailer below:

The American Film Institute-produced film has played at several film festivals so far including the Rome Independent Film Festival, the Albuquerque Film & Media festival and the Toronto Italian Contemporary Film Festival.  It was also recently programmed into Montreal World Film Festival which runs August 23 to 27, 2014.  If you have the opportunity see it, I recommend you do.

The most impressive thing about the short film is the intense emotional impact it packs in just 15  minutes.  Most of the characters in the film are gun-toting Caucasians cautiously guarding their country's borders from folks they deem unwelcome.  Not all of them are violent; indeed, the main character, a retired rancher, seems mostly interested in protecting his family.  Although his recruitment of his adult grandson and arming him with a gun proves quite destructive: the young man ends up shooting a young Mexican woman trying to cross over.  The two men bicker about what to do next until they are joined by more militant militia compatriots who try to seize control of the situation.

Monti's direction is powerful, showing the tragedy of lost humanity amid hatred, ideology and stupidity.  Most of us know little about these types of people who "guard" the U.S.-Mexican border to keep foreigners out.   It's great this little gem of a film shines a light on the subject.  All around, it's a great calling card for the director, as well as writer Kate Weddle.

The themes of lost humanity amid hatred, ideology and stupidity, as well as a major and tragic cultural divide, reminded me about what's been happening in Toronto lately.  The most recent example happened Friday evening when anti-mayor Rob Ford held his annual bbq in Scarborough's Thomson Memorial Park designed to promote himself and his family.  Thousands of Ford Nation lemmings showed up, the type for whom no behaviour from Rob Ford is too repulsive to shake their support.

But also showing up to the public event were some very brave LGBT activists with rainbow flags, signs and bullhorns ready to send a message to the Fords and their supporters that most of us outside Ford Nation hate what their bigot has done to our city.   They were met with derision, homophobic slurs and violence (both physical and destructive of property.)


CP24 even got this shot which they described as an "alleged assault."  Not too much alleged about it, if you ask me: 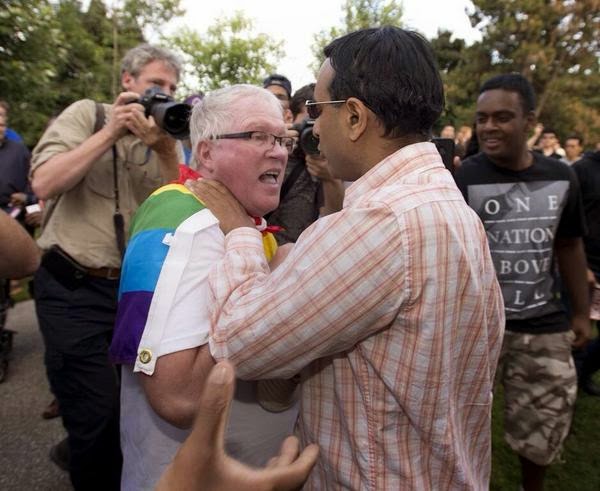 It seems when you, in not so subtle ways, signal unrelentingly disrespect and hatred toward the LGBT community, as Rob Ford has done, that hatred trickles down to the lemmings who are emboldened by your arrogant bigotry.

In response to the violence, Toronto Police mimicked their investigation into Rob Ford's other crimes by simply standing around, observing and then not laying any charges.

In the end, it took Doug Ford to try to "calm" the waters by apologizing to the LGBT community, but then doing his typical thing and blaming the LGBT activists for the assaults.

The divide between smart Toronto and Ford Nation remains as wide as ever.

Yes, Toronto Police seem to have an inconsistent approach to handling crime.  If you merely encourage online for people to throw food at Rob Ford and nobody ends up doing it, you still get charged with counselling an uncommitted indictable offence.

Meanwhile, if you're at the event and put your fingers around the neck of a LGBT protester in a threatening manner like the man pictured above did, or you tear personal property like signs out of other people`s hands and destroy it, and it's all recorded on video, the Police still won`t do anything about it.

I guess Toronto Police can`t tolerate alleged crime when it`s committed against Rob Ford, but when it`s committed by Rob Ford or his supporters, it gets a pass.
Posted by Matt Guerin at 9:11 AM
Email ThisBlogThis!Share to TwitterShare to FacebookShare to Pinterest