It sucks when lefties so desperately want to win that they toss out their basic principles or judgment in order to try to do it. Such is the case with NDP candidate Linda McQuaig in the Toronto Centre byelection.

We've seen innumerable sleazy attacks coming from the NDP during this campaign all trying to assassinate the character of Liberal candidate Chrystia Freeland. These have included mischaracterizing Freeland’s work and her positions on income equality and globalization and even calling LGBT people supporting Freeland "self-loathing." See the image below of a tweet from a paid NDP staffer. 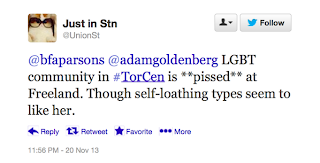 These attacks of course follow attempts earlier this year by New Democrats to meet with Freeland to discuss her important work, including an invitation to address the Broadbent Institute. So the attacks are not fair or even honest.

Last night on the TVO debate of Toronto Centre's main candidates, McQuaig went over the line and headed into xenophobic territory. Yes the NDP is now sounding xenophobic in order to win votes.

After the host raised the issue, Freeland questioned the NDP position on making it easier to break up the country by quashing the 13-year-old Clarity Act and replacing it with a 50+1 simple majority rule.

In response, McQuaig shot back at Freeland: "I'm not going to take lectures on this from somebody who hasn't even been in the country..."

Even Tory candidate Geoff Pollock called McQuaig out for her xenophobic comment.

"I would've expected more from somebody who's representing the party of Jack Layton,” said Pollock.

You can view the TVO debate here.

These over-the-top attacks by McQuaig remind me of another byelection in which the NDP played dirty in order to win at all costs.

It was 2001 in the provincial riding of Beaches-East York where the NDP campaign attacked the artistic freedom of the Liberal candidate, Bob Hunter, who had written a piece of satirical fiction called 'On The Sky' with characters that offended then-NDP MPP Marilyn Churley. The book was a fictional travelogue, written in the same style as Jack Kerouac's 'On The Road', and it detailed using a first-person narrative a trip to Asia in which the characters engage in underage prostitution.

Troubling stuff, but fictional. Yet the NDP rushed to judgment without doing any research and, with only days to go before the by-election, Churley and the NDP campaign held a news conference to declare Bob Hunter "unfit for office".

Because of his fictional book.

"It says something about [Bob Hunter's] character he could write such nasty, disgusting stuff about young girls in Thailand," said Churley.

Until then, I had thought the NDP were unwilling to toss out all of their principles in order to win. Surely, things like artistic freedom were more important than electoral advantage. But I was wrong.

Hunter lost the byelection to Michael Prue, but launched a libel suit against the Ontario NDP for insinuating he was a pedophile for writing his work of fiction. "I'm personally offended, first of all as a writer, that they can't tell the distinction between fiction and non-fiction, and otherwise as a family man," said Hunter at the time, who has since passed away.

Later, a contrite Ms. Churley said: "I do regret saying that...I don't think he's unfit for office. I was very disturbed by the book. I am a feminist ... I found it very revolting."

Perhaps one day McQuaig, running to represent a riding in which the majority of citizens have moved here from other countries, many of whom would like to think they can take part in debates and discussions about Quebec and other Canadian issues, may come to regret the xenophobic tone of her current campaign.