Message to Ford Nation enablers: It's time to give your own children some crack cocaine! 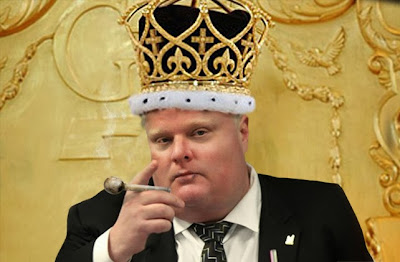 What a day! I was supposed to get some creative writing work done, but instead the circus that is Toronto Mayor Rob Ford overwhelmed me. Ford's lunch hour confession that he has smoked crack cocaine "probably" during one of his "drunken stupors", followed by his late afternoon refusal to accept any real responsibility for this admission tipped me over the edge into full-blown fury.

Kudos once again to the Toronto Star for nailing to a tee in this editorial the situation in which our great city finds itself tonight:

"A filthy tapestry of deception, bullying, character assassination, and false allegations of conspiracy unraveled Tuesday with a six-word confession from Mayor Rob Ford: “Yes, I have smoked crack cocaine.” That’s just as the Star reported in May."

"Exposed as a fraud, and struggling with debilitating substance abuse, anyone with an ounce of civic duty would have stepped down — to seek professional help, if nothing else. Instead, Ford vowed to stay on for the sake of taxpayers and because “I love being your mayor.”

"No responsible Torontonian shares that feeling. In a display of overweening egotism, as the rest of the world laughs at Toronto’s “crack head mayor,” Ford insists this city can’t do without him. He couldn’t be more wrong. He is grossly unfit to lead Toronto."

"After all his deceit and misrepresentations on the issue of substance use, Ford now insists that’s all behind him. He won’t ever, ever do it again. Honest. This time he really means it. Who could possibly trust this man?"

It's nice to be able to freely quote the Toronto Star on the fiasco that is Rob Ford again after so many months of hateful, lie-filled attacks against the paper's integrity, now proven to be nothing more than bullshit desperation by Ford, his cronies, and his enablers in Ford Nation. The professional and quality journalism this fearless news organization has exhibited continues to be vindicated by this past week's turn of events.

But as for those enablers who continue to support Ford and may even react to today's confession with a shrug, I have only animosity. Ford is clearly exhibiting the signs of an addict and man-child no longer in control of his impulses (qualities he exhibited for years before his election in 2010, mind you). This is a man who needs help with his demons and clearly doesn't even know it.

To continue to support Ford is to enable an addict and a very troubled man. If you would do that to the man leading your own city, why would you also not do that to someone even closer to you? Ford is a family man, after all. His own siblings have had drug addictions, as we know. The biggest Rob Ford enabler in all this is his own brother, Doug Ford.

If you can shrug and turn a blind eye to Rob Ford's addictions (by saying perhaps, "Well I don't care what he smokes or how much he drinks as long as he cuts my taxes,") then isn't it hypocritical if you don't also shrug if such addictions affect people in your own family? If the mayor of this city can abuse crack cocaine and still earn your support, why not take this indifference to its extreme and offer crack cocaine to your own kids?

If you can forgive Rob Ford, certainly you could forgive your own kids for smoking crack cocaine too? If anyone who claims to be a member Ford Nation says otherwise, then you are complete hypocrites.

Today's events simply reinforce an extremely depressing trend of non-accountability by high profile conservatives in Canada. Prime Minister Stephen Harper appointed three high-spending Senators who went on to abuse taxpayers' trust. Harper appointed his own Chief of Staff Nigel Wright who allegedly covered up that expense scandal and illegally paid off one of those senator's expenses. For this, Harper replies that he "couldn’t care less" what the critics think and he blames everyone else for the situation that he himself created.

Such is the state of accountability in Canada these days. Sad indeed. It's like we are experiencing a complete breakdown in values. Our leaders are acting like man-boys who bully opponents, lie, cheat, steal, cover up crimes and do anything and everything to stay in power. What kind of message are we sending to our kids by keeping these types of leaders in power?

Indeed, offering children crack cocaine seems the next logical step in this tragic farce that has become modern Canadian politics.

Posted by Matt Guerin at 10:28 PM
Email ThisBlogThis!Share to TwitterShare to FacebookShare to Pinterest