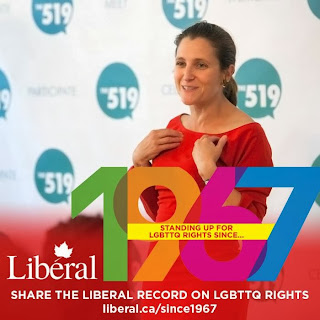 All political parties have checkered histories when it comes to supporting LGBTTQ rights. Some individuals in all parties have shown great leadership in promoting equality.

Yes there has been some dissent by Liberal MPs when issues of LGBT equality have come up, one or two of whom are still in the federal Liberal caucus. But they are massively outnumbered by LGBT allies these days.

I'll be fair and say that the NDP has mostly had a great record promoting equality rights and LGBT rights generally. But it hasn't always been that way.

I present these two quotes from the late 1960s to remind everyone of this, in light of NDP arrogance today on Twitter that their party has a perfect record with regard to supporting LGBT rights.

NDP icon Tommy Douglas was addressing the issue of decriminalizing homosexuality in the 1968 federal leaders' debate when he said: "(Homosexuality) is a mental illness, it's a psychiatric condition, which ought to be treated sympathetically by psychiatrists and social workers.”

This followed the 1967 comments by former Liberal Attorney General and future Prime Minister Pierre Trudeau: "There's no place for the state in the bedrooms of the nation," stated to defend his intention to decriminalize homosexuality in Canada. His government would go on to do so in 1969.

So the NDP hasn't always been perfect over the years in its support for equality. I readily admit that the Liberals have been far from perfect either. I briefly parted ways with the Ontario Liberals in the 1990s over the same sex benefits issue described above.

But today, the federal Liberals have a proud record of supporting equality for LGBT people. Toronto Centre Liberal candidate Chrystia Freeland is a big supporter of equality rights for LGBT people. She has told me she hopes to also be an advocate for LGBT youth across the country, many of whom find themselves in Toronto, frequently under housed or homeless. She also wants to be an advocate for LGBT refugees who find themselves cut off from health care in Canada due to changes brought in by the Harper government. Freeland also hopes to use her voice (including her ability to speak Russian, after spending a couple years as bureau chief in Moscow) to strongly communicate our outrage against Russia's anti-gay legislation.

Freeland is a friend of the LGBTTQ community and will be a powerful advocate for our issues in Ottawa. That's why I'm proud to support her in this Toronto Centre by-election.

Posted by Matt Guerin at 2:36 PM
Email ThisBlogThis!Share to TwitterShare to FacebookShare to Pinterest