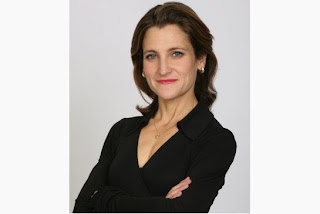 It's now confirmed that author and journalist Chrystia Freeland (pictured) will be seeking the federal Liberal nomination in Toronto Centre for the upcoming byelection to replace retiring MP Bob Rae.

Freeland is obviously a brilliant writer and journalist, having penned the influential 2012 book 'Plutocrats: The Rise of the New Global Super-Rich and the Fall of Everyone Else.' I dare say that this book will be on the summer reading lists of most Toronto Centre Liberals, including this one.

I caught an interview she gave on TVO last fall about the book and was fascinated by her thoughts on the plutocrats/super rich who are running our economies and our countries nowadays. You should check it out below if you have 20 free minutes.

She's obviously got the brains and experience to add considerable intellectual heft to the federal Liberal team as it regroups and modernizes itself before the 2015 election. Her candidacy seems completely in sync with leader Justin Trudeau's message about strengthening the middle class as the engine of future economic prosperity. It's exciting to see someone of Freeland's credentials putting her name forward.

I must say though that I'm a bit concerned that Freeland has spent so much time away from Canada. There are unfortunate echos of former leader Michael Ignatieff in this. Of course, Ignatieff made an excellent MP who won election in 2006 for the first time despite the Liberals losing the election. He would've made an excellent cabinet minister in a possible Liberal government. But as leader, he was a disaster, as we know.

Still, Freeland isn't running to be federal Liberal leader. Mr. Trudeau clearly has a good 10 to 15 years ahead of him in this job as he struggles to rebuild the great party. His pledge to hold open nominations in all ridings including Toronto Centre is a breath of fresh air that will allow party members to decide the fate of those who put their names forward.

My friend Todd Ross has already announced he's running for the same federal Liberal nomination in this riding. His are a different set of strengths from Freeland. Ross is the consummate community organizer having worked directly with dozens of local organizations, building contacts and making friends for years in the riding. His background working with George Smitherman, plus his openly gay status doesn't hurt either. I do think there are many Liberals and non-Liberals in this riding who crave an MP with such grassroots credentials after so many years of MPs like Bob Rae or Bill Graham. Yet again, perhaps they're outnumbered by voters who like having big names who can play major roles in governments like in cabinet.

Regardless, with Trudeau's blessing for Freeland, we may soon see other high-profile names such as George Smitherman, Seamus O'Regan and Sachin Aggarwal pull out of the race and endorse her. But Todd Ross should stay in the race and give Freeland a run for her money. Ross is the local candidate with grassroots credentials who's done a tonne of work already in his life to directly benefit the many communities in Toronto Centre. Freeland will have to earn her nomination the old-fashioned way and outwork her opponent in a fair fight. If she wins the nomination, she'll be a better Liberal candidate against the NDP, who will no doubt attack Freeland for being a parachute candidate from south of the border with little connection to voters here. Regardless, it will be one interesting race!