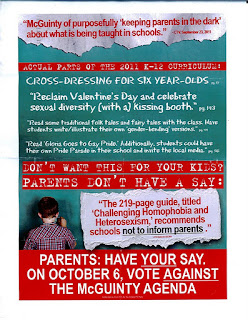 Thanks to Warren Kinsella who posted about this issue today. If you needed further proof that Tim Hudak's Ontario P.C. party has been taken over by the Tea Party, check out this disgustingly hateful and misleading pamphlet on the right. This pamphlet follows Hudak's attempts earlier in this Ontario campaign to appeal to racism with his attacks on underemployed Canadian immigrants, calling them "foreign workers". Now this!

According to Kinsella, the Tories are circulating the pamphlet in Brampton ridings, alleging this policy developed by the local Toronto District School Board (i.e. not the province, not the local Peel school board, etc.) is somehow provincial policy.

The Tory pamphlet alleges the McGuinty Liberals are somehow conspiring to keep parents in the dark about sex education which includes the promotion of cross-dressing. These allegations are false, utterly ridiculous and misleading, as the policy was drafted by the local Toronto school board, not the province. The alleged "keeping parents in the dark" presumably refers to the following section of the local board policy:

Should Schools Send Notes Or Permission Slips Home Before Starting Any Classroom Work About Curricular Issues That May Involve Discussions About Discrimination and Harassment?

No. The TDSB Equity Foundation Statement and Commitments to Equity Policy Implementation states that each school has a responsibly to education that reflects the diversity of its students and their life experiences. Singling out one group or topic area as too controversial, and depending upon parent/guardian/caregiver discretion, shifts this responsibility from the school to the parents/guardian/caregivers and fosters a poisoned environment contrary to the TDSB Human Rights Policy.

Sending a school newsletter home at the beginning of each term is a best practice for keeping parents/guardians/caregivers informed of all upcoming equity topics in the classroom without having to single out one topic over the other.

I encourage you to read the local board policy further as it's a great read, clearly written by Toronto education professionals who take seriously their responsibilities to ensure a safe and secure environment for all students - not just the heterosexual ones - in Toronto's schools.

It's abominable that the Hudak Tories have decided to attack the provincial Liberals for a policy they didn't initiate. Yes, Tim Hudak seems more than happy to mislead the public and appeal to irrational bigotry and homophobia in order to win votes.

Tim Hudak is disgusting and most definitely not a leader for Ontario!
Posted by Matt Guerin at 6:51 PM
Email ThisBlogThis!Share to TwitterShare to FacebookShare to Pinterest

A representative from my union informed me that I do not need parental permission when reading about or discussion general topics related to sexual orientation. For example, The students can read or listen to stories about two daddy penguins taking care of an egg, two moms, a boy who likes dresses, and a teen who gets bullied for being effeminate (Stitches).

I have taught in public schools with with different cultural groupings--both homogeneous and heterogeneous. I rarely talk about sexual orientation with the students. It might be once per year for a classroom discussion. I may talk about bullying by using gay slurs a few times.

The point of the TDSB policy that was mentioned is that teachers are not required to receive parental permission when reading about Black History Month, a Chinese-Canadian family, Terry Fox, Rosa Parks, or Anne Frank. Why should teachers be required to inform parents when there is a reading and discussion about anyone who is not a heterosexual?

" I may talk about bullying by using gay slurs a few times."

That doesn't sound right. I think you know what I mean.