This internal Tory backlash against federal Tourism Minister Diane Ablonczy just for acknowledging our existence in this country and helping our biggest festival has truly pissed me off. What percentage of the Canadian population would describe themselves as socially conservative, religious fundamentalists? Probably less than 10 per cent. Yet they seem to be in complete control over the Harper government, now don't they?

Apparently, one of Ablonczy's biggest sins was allowing herself to be photographed near a drag queen at the June funding announcement for Pride Toronto. If you wanted to understand how our micro-manager Prime Minister makes decisions, this case is a perfect example! 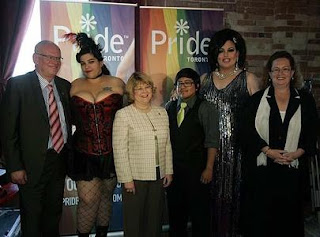 My message to so-cons because you seem to have forgotten: LGBT citizens pay taxes too! As such, we should also get a piece of the federal pie too, not just those who love the Calgary Stampede! You do not get to control 100% of the budget just because 38% of Canadians marked Tory on their ballots last October (despite the flaws of our electoral system, that still only translated into 46% of the seats.)

If there are decent, fair-minded heterosexuals out there, let this "controversy" provide further proof why the Harper Conservatives are clearly out of sync with modern Canada and need to be removed at the first possible opportunity.
Posted by Matt Guerin at 10:29 AM
Email ThisBlogThis!Share to TwitterShare to FacebookShare to Pinterest

You know, I consider myself to be a social liberal and have no issue with homosexuality, but I do have a problem with the federal government...any federal government funding an excuse for gays to wave their sexual organs around in what amounts to indecent exposure.

Honestly, after seeing some of the pictures from the Toronto event, I believe some arrests should have been made.

So, you're gay, we get that. Big deal. Does it really need a parade? Especially funded by my tax dollars?

Oh, and BTW, yes they do get to control 100% of the federal budget.

Who needs truth when you can wallow in ignorance, eh? Who needs fairness when you can slumber in injustice, taking more than you deserve, right Jim?

Jim, and I'm sure you consider yourself a guy open to equality for females so long as they stay in the kitchen and keep quiet.

Though I think if we are going to have a government which promotes only safe family friendly events the Calgary Stampede has to be one of the first to go. The "biggest threat" to any straight marriage after gays is divorce.

Wow, you and Roy are quite a team.

This has nothing to do with equality or injustice...this has to do with publically funded indecent exposure.

Parades are for the enjoyment of the public in general. I could not in good conscience, have taken my children to watch the spectacle that was the Toronto pride parade.

Sometimes modesty has it's place. Obviously, that means nothing to you. Your sexuality (and genitals)need not be paraded in front of my small children. It is even more of an afront that my tax dollars helped pay for it.

I don't know where you come up with the crack about women, Roy. It is completely uncalled for, you don't know me, so keep it to yourself.

Well I find much of the Calgary Stampede morally objectionable. How many animals have to die so a few cowboys can have some fun? Not to mention various other festivals that get federal or provincial funding that I have no interest in attending. I guess using you're logic, Jim, all funding for things I don't like should be shut down? Wow to be so arrogant and self-centered!

I just LOVE when frickin' idiots spout off the "I'm not racist...(but)...", or the "I'm not anti-gay... (but)..." bs. Admit what you are. The financial excuse is the best... lol... It's OK to fund millions into the Calgary Stampede (even though millions of Canadians oppose the cruel treatment of animals)? It's OK to fund quasi-intolerant religious/cultural groups (you know the handful of groups we're talking about) with government handouts which most Canadians don't agree with?

A government - PARTICULARLY A MINORITY GOVERNMENT - must represent the wishes of all the people - not just the tiny minority that elected them (although this government seems to have found a way to buy themselves out of that constitutional idea). Past Liberal and PC governments openly funded groups (including groups that supported the other end of the political spectrum). They did, however, carefully take care to ensure funding did not go to "hate" type groups...

We're not about to argue what the Reform-a-Tories prefer to do here. Nay... we prefer they keep doing it - but "come out of the closet" (or so to speak) with their seemingly thinly veiled hatred. If not, we'll keep working to expose them.

Closet racists and homophobes...? We're betting on it.

Jim, I'm not sure what publicly funded indecent exposure you are talking about. The funds that went towards the gay pride were directed towards increasing the accessibility for those individuals with a disability and attracting entertainers.

And I'm sure those who did attend the Toronto pride parade are glad you and your "conscience" didn't show up. Many individuals have no issues taking their family to the gay pride parade as it is a family event. Your opposition to the parade is far fetched and reactionary and simply does indicate your issue with gays in general. Though lets be clear the gay pride parade does not just include gays but straight individuals as well or the "we" people as you like to refer to them as.

What crack are you talking about? I've met enough people in my lifetime that after they start the sentence "You know I don't have an issue with _____________ (list which ever group in society you have an issue with) but those __________ (include derogatory term for group you have an issue with) need to either be like everybody else or get out. That you know they have a horrible hatred for the group they attempt to say they don’t have an issue with. It seems entirely based on what you said and focused on is that you have a dislike for gays. Your responses have been focusing on homosexuals and your view that the pride parade was full of indecent material not safe for children. Your post has not focused on why you think the pride parade should not receive funding from the government.

Jim, you say you are a socially minded liberal with no issue with homosexuality. So you ask a pretty simple and straightforward question of “So, you're gay, we get that. Big deal. Does it really need a parade? Especially funded by my tax dollars?”

My first response to your question is who is we? I’m pretty sure you wouldn’t be talking for all the straight people in Canada because many have no issue with the guy pride parade including the Government of Canada which had a Minister deliver some of the funding for the gay pride parade personally.

Does there really need to be a gay pride parade and have some taxpayer funds support it? By asking the question of the need for a parade; you miss the point of the parade entirely. Look to the history of the gay rights movement in North America and you will realize why gay pride parades emerged when they did.

You seem to indicate that you wish homosexuals would just quit having to share with society their sexuality and they largely did that in North America up until the 1960s and 1970s for the simple fact it was against the law. So you would have had your wish during the period before 1960 for homosexuals to keep their sexual orientation private. And even after homosexuality was decriminalized in Canada in 1969 or in the States during the 1960s-1970s in which sodomy laws were removed from the books. You still find that homosexuals kept their sexual orientation private for a number of reasons including fear of physical violence and the possibility of losing their job. So homosexuals would gather in areas in which other homosexuals went as well. The same thing is often done when individuals from other countries immigrate to Canada and they tend to settle in an area in which other individuals from the same country have already settled into. It creates the community and assists the individual in settling into the general population. Now the difference with homosexuals is that society decided that even though they were keeping to themselves that it was the role of society to start to harass homosexuals in the places that they would often gather. So that is why you had police raids on places frequented by homosexuals. So homosexuals for a time took the abuse and harassment as a way of life because really when it is the law of the land that is punishing you for being gay who are you going to turn to for protection? So come June 28, 1969, you had what started out as a normal raid on a gay bar but turned into the Stonewall riots in which gays (gays for me is an umbrella term) finally fought back. The result of the Stonewall riots became the gay rights movement and in part gay pride parades. So if you don’t understand why there are gay pride parades go back and read the aftermath of the Stonewall riots.

As for the need to fund gay pride parades, it is certainly not necessary to fund any kind of parade but when your economy is in a recession it seems like a pretty smart idea to invest in community events which will attract roughly a million participants and have a great impact on the local economy.