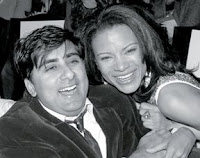 I always hate it when entertainment columnists who know little to nothing about political matters delve into the political arena.

Forget the fact that Govani writes for the anti-Dion National Post. One wonders how truly weird Govani found his encounter with Dion at a recent book launch party in Toronto, or how weird Govani's editors ordered him to feel. The bitchy line under Dion's photo accompanying the piece implying once again the Tory line that Dion can't speak English is true National Post-PMO talking points with visual aids.

Sure Dion's English isn't perfect, but I'm getting tired of hearing him described like this. Are we talking about the same guy?

My only solace comes from the fact that once Dion gets a chance to truly show off his decent English skills to Canadians, albeit with a strong French accent, all this talk of Dion being tone deaf in the English language will be swept away (along with that Tory bullshit about him not being a leader.)

The truth will sweep away the Tory spin.

The funniest part of Govani's column: "I tried to muff the awkwardness [to] make a wee joke. And because I had, earlier that day, just happened to be at a lunch with The Governator, I zinged to Dion: "It's been a bizarre day. I saw Schwarzenegger today, and now you." He looked through me...in a I'm-Jodie-Foster-in-Nell-and-I'm-a-savage-child-of-nature-and-I-don't-understand-you kind of way. Tres weird."

Anyone who's ever met Govani knows he's about four feet tall, always overdressed and has one of the funniest sounding voices on TV (when he appears on TV.) He can be cute and coy at times, but mostly kind of annoying.

No doubt, Dion didn't recognize him. Why would he? He's from Montreal and works in Ottawa. He doesn't make the rounds on the Toronto entertainment circuit. Govani was undoubtedly shocked that his little insult failed to impress Mr. Dion.

Sure Dion needs to flex his social skills a bit more. But to write off this encounter as proof positive that Dion can't speak English is a little over the top.

Anyone who's ever met Govani knows he's about four feet tall, always overdressed and has one of the funniest sounding voices on TV

When I read the column this morning, I broke out laughing. Govani is complaining about how someone speaks? He sounds like he has a kazoo stuck in his throat for goodness sake.

Dion's english has improved and will only get better. No worries, Govani is simply trying to make a case for his own importance...again.