What a weekend for Gilles Duceppe and Pauline Marois! 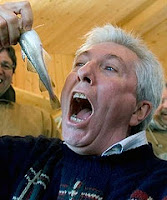 What an exciting week it's been to be a Quebec separatist, I have to say.

I take back what I wrote earlier about the PQ marching back to a "normal" leader like Gilles Duceppe.

It would seem the party is in much more mood to stay outside the leadership norm of the male, heterosexual, married-with-kids stereotype.

When electing new leaders, I've noticed that most political parties tend to try to find a balance between the need to forge ahead and respecting the immediate past. Party members don't like to admit they made a mistake last time.

By electing a woman leader to replace a gay male leader (which now seems to be inevitable), the party will say it's still okay to pick leaders from outside the norm.

Will Pauline Marois have what it takes to take the PQ back to power? It remains to be seen.

Gilles Duceppe fumbled this very badly this weekend. He will be very hurt by this, no doubt. I think this next election will be his last as BQ leader.
Posted by Matt Guerin at 10:44 PM
Email ThisBlogThis!Share to TwitterShare to FacebookShare to Pinterest