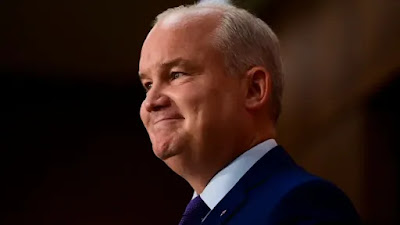 Once again, the power of social conservatives to determine the outcome of Conservative party leadership races in Canada knows no bounds.

Sloan barely got elected to Parliament last year from Northumberland county in Ontario, and has since gone on to spread considerable and typical socially conservative B.S., doing his best imitation of the orange sociopath in the White House, including stupid comments earlier this year about the scientific origins of homosexuality (please leave the science for scientists!)  Sloan's biggest claim to fame: spreading racist doubt against Canada's Chief Medical of Health Doctor Theresa Tam simply because she was born in China.  Therefore, she couldn't be trusted to defend the health interests of Canadians, Sloan insinuated.

In response to this crap, 15.6% of Conservative party members voted for Sloan this summer.  That translated into 14.3% of the points across the country.  This percentage was on par with the votes received by Brad Trost, another dimwitted so-con back in the 2017 Conservative leadership race.   The Conservative leadership voting system gives all 338 ridings equal points regardless of the number of memberships held locally.  All ridings get 100 points contributing to 33,800 points across the country.

Lesley Lewis' results were even better.  Despite never being elected to anything, and despite being unable to speak any French, Lewis garnered a scary 24.7% of the raw vote in the Conservative leadership race on the first ballot.  That vote was concentrated in certain pockets of the country like Saskatchewan (where she won the points outright on the first ballot) as her points across the country were only 20.5%.

Lewis was well-spoken as a candidate in English, and I will admit she did manage to sound more reasonable on many issues than Sloan.  Her position on same sex marriage was discriminatory, an irony not lost on me as she's a Black woman.  (UPDATE: I've been taken to task for emphasizing her gender and race, which is ridiculous because both were very much relevant to how she was perceived in this race.  Lewis very much presented the professional, sophisticated, immigrant Black woman who could re-define the image of the typical Canadian conservative.  Yet she still possesses anti-gay positions including opposition to same sex marriage.  It has been suggested her "personal" position is not relevant as she promised she wouldn't re-open the marriage issue (the same policy held by Andrew Scheer) and allegedly does no harm.  In truth, it does a lot of harm.  Any opposition enunciated by political leaders to same sex marriage reinforces disrespect against all gay people, which is the opposite of the "respect" Lewis claimed she would offer for "everyone."  When political leaders take these positions, it sadly reinforces existing resentments and bigotries in society, and gives tacit permission for those bigotries to continue, which in turn leads to continued and justified violence and discrimination against queer people.  Most of the conservatives guilty of this will, of course, never see the violence they helped promote with their ideologies, which again is part of the problem, because then they will pretend it doesn't exist (see the Republicans in the U.S. for many examples of this.)   I also see the effect of Lewis' race and gender as having given permission to the white anti-gay so-cons in the party to continue to hold their positions and vote for her, and even feel good about it.)

Nevertheless, I will admit that Lewis is an accomplished person and would make a decent Conservative Member of Parliament, based on her experience (as we know many Con MPs still harbour the same anti-gay positions on marriage).  But like I said, she speaks no French and has never been elected to office.  The notion that she should be Conservative leader this year is foolish.

Yet the so-cons, plus probably some other more moderate Conservatives, still cast ballots for her in huge numbers, challenging the two front runners, Erin O'Toole and Peter MacKay.

Erin O'Toole, of course, is no social conservative.  Yet he's clearly smart and learned many lessons from his failed 2017 leadership run when he sounded decidedly more moderate, and more in tune with mainstream Canada.   After seeing the massive amount of votes for unqualified social conservative candidates in 2017, O'Toole clearly decided he needed to reach out to these people and win subsequent ballot support for this year's run.

Thus, O'Toole pretended this year he was a so-called "True Blue" conservative, taking regressive positions on public funding for Canada's public broadcaster, for example, and promising to "Take Back Canada," whatever that means.  It was coded language designed to appeal to the substantial bigoted base of his party.

I'll never understand how moderate conservatives can stand next to and empower bigots like this, who so clearly make up a sizeable minority of the party.  Truth be told, conservatives once they win elected power, tend to ignore social conservative issues.  See Ontario Premier Doug Ford as the latest example of this.

No doubt, O'Toole, now safely in power, is free to remind us that he's "pro-choice" and intends to walk in Pride parades, unlike his predecessors Andrew Scheer and Stephen Harper.

In truth, I've liked O'Toole for a while.  He seems like a decent man and is also a more natural fit for leadership, including stronger communication abilities than both Scheer and Harper.  He comes from a fiscal conservative, not social conservative wing of the Ontario party.  Thus, I don't really worry too much about what O'Toole might do should be actually win an election.   I doubt he'll ever shut down Canada's much-loved public broadcaster (you can't shut down and sell the English CBC and still leave the French equivalent SRC seriously viable as a company, as he promised this year).

O'Toole's campaign this year simply exposes how shrewd a strategist he can be.  He used social conservatives to get over the top in this unique race.  And politics is ultimately about winning.  I can't fault him for being a good strategist.

He's still got a lot of work ahead of him to get known and define what his leadership would mean to mainstream Canada.  On that front, he'll struggle against a fairly entrenched Liberal incumbent whose support went up this year thanks to Justin Trudeau's stewardship during the pandemic.

Still, O'Toole is leaps and bounds better than Scheer, who reminded us all again how pathetic he is during his farewell address to the party on Sunday night.  For that, at least, I am grateful.

Posted by Matt Guerin at 2:32 PM
Email ThisBlogThis!Share to TwitterShare to FacebookShare to Pinterest