Special message to ignorant, bigoted conservatives during Covid-19: Go ahead, meet up in big groups, go to church, hug and lick each other, spread the virus amongst yourselves!

I've gotten so angry lately when I hear about idiotic conservatives bitching and whining (even more than usual) about how they're being oppressed by public health rules trying to minimize the catastrophic health impacts of the ongoing Covid-19 pandemic.

In their latest attack on science and basic facts, many conservatives are now taking to the streets to hold unsafe protests, thus making the public health emergency potentially even worse.

These entitled whiners, mostly White, have no idea what it's like to live under rules, whether written or unwritten, that greatly limit their choices - so to finally face some inconveniences these days seems foreign to them.  They're like spoiled children angry they can't play in the park anymore.

We've seen this entitled conservative bullshit spreading in parts of the United States.  The evil scumbag Trump is encouraging public protests as he thinks they somehow reinforce his own insidious messages, all of which are only designed to re-write history to benefit himself and his re-election hopes.  I'm convinced Donald Trump doesn't truly give a shit about public safety.  He only wants the economy to recover - not to help out ordinary families who are also facing economic crises - but to help him win re-election.  Yes, this is what happens when you irresponsibly elect a narcissistic sociopath as President - you get total chaos during a health crisis and the death rate from the virus skyrockets - over 40,000 and climbing in the U.S. alone when a more responsible president would've taken action sooner and saved many of those lives.  I'm sure Hillary Clinton would've saved thousands from the horrible fates they are now set to experience thanks to Trump.

Brazil's conservative president, Jair Bolsonaro, has been doing the same idiotic thing: playing down the virus for months, first pretending it's all a hoax, only begrudgingly accepting the truth in recent weeks, but still undermining public health with irresponsible messaging that encourages other idiotic conservatives to take to the streets.

Most conservatives, who usually demand full consequences and responsibilities for liberals and other people they don't like, of course, exempt themselves from personal responsibility and consequences.

"Consequences are for liberals," they might as well be saying.   That's certainly always been my impression of conservatives.

Well, it's time for consequences to finally hit these ignoramuses.  Covid-19 doesn't discriminate based on race or gender or sexual orientation like conservatives love to do.  As the educated know, it can infect anyone.

"The blood of Christ" won't protect these idiots, as one American woman recently claimed to the TV cameras while driving into a fundamentalist church parking lot to attend a service.  Many conservative governors in the U.S. have refused to ban church services during this crisis.

I do sympathize with all who have temporarily lost their livelihoods because of this crisis, including small business owners who can't operate and might lose their businesses as a result.  There is a lot of economic pain out there at this point.  Vulnerable people like minimum wage earners have been the worst hit.  Liberal governments have been pumping economies with measures intended to help get us through this.  First in line for government handouts have been, of course, conservatives.

Sadly, collective welfare needs to trump individual profit at this point.  Adopting stringent rules this spring to protect public health and safety will allow the economy to be re-opened safely as soon as possible in the near future.  Irresponsibly re-opening the economy too early is likely to cause extra thousands of people to die horribly from this virus and possibly a second, even more severe wave of illness later this year.  Let's keep our eyes on the ball and not be distracted by these whining, entitled idiots. 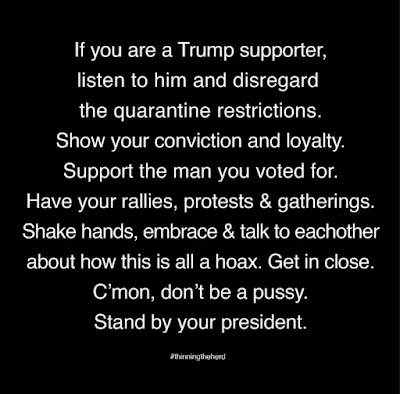 The only silver lining to this pandemic might just end up being a natural culling of ignorant conservative bigots.

When these arrogant folks go outside, meet up for big protests, attend church services, end up spitting on each other or licking each other or whatever they end up doing together, it will cause the virus to spread further among them.  As most of these idiotic conservatives live in Fox News-style echo chambers / bubbles where they never interact with intelligent liberals, the bulk of the consequences will be faced by them.

Here's my special message to these ignorant bigots: keep it up.  Get out there.  Infect each other.  Go home to your conservative, no-doubt-bigoted elders and give them the virus too.

And I don't really need to say this to liberals, most of whom are educated and intelligent: continue to practice social distancing, stay away from conservatives, and you'll probably be fine.

If, at the end of this Covid-19 crisis, we have far fewer idiotic, paranoid, angry, bigoted conservatives, that will be a good thing. Yes, I said it.
Posted by Matt Guerin at 2:42 PM
Email ThisBlogThis!Share to TwitterShare to FacebookShare to Pinterest