Will we be celebrating the end of the horrid Trump era one year from now? 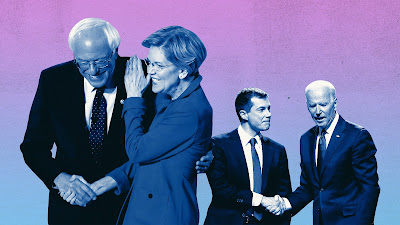 Happy New Year to all!

Politically, I couldn't help but think last night as the clock struck midnight that 2020 will be a pivotal year for the world.

Much hangs in the balance.  In 2020, a key question will be answered: Is this a world where a narcissistic criminal who plays on fears and the worst of human instincts for personal profit is rewarded and strengthened?  Or is this a world where such a criminal gets his first taste of justice and deserved defeat?

It's not just an academic question.  Our ability to survive and endure the effects of climate change rests on if Americans will play ball with the rest of the civilized world in time for 2030.  So much is wrong with the world right now and Donald Trump is making all of it worse with the biggest and most damaging vanity project ever produced.   It's got to come to an end this year.

But will it?  Will this be an unfortunate four-year blip, a stark reminder of the darkness that exists in many parts of America and the world, but luckily can be beaten back?  Or will eight years of our lives, almost an entire decade, be dominated by this pathetic, narcissistic, low-life monster?  And confirm our downward spiral as a species on this planet?  I'm not sure I can take another four years of this torture.  I know the world cannot.

Efforts by Democrats to challenge Trump with impeachment were just and the right thing to do.  The guy is a brazen criminal who must be challenged.  Yet despite this, Trump's base remains as solid as ever.  It's despicable.

But there is much hope.  In 2018, 53% of Americans came out to support the Democrats in mid-term elections, giving that party its biggest mid-term vote percentage victory in generations.  Despite the strong economy, most polls have given Trump disastrous approval ratings since 2017, the likes of which typically precede electoral defeat.   While Trump's supporters were more motivated by far to turn out and vote in 2016 than Democrats, collective disgust and fatigue with Trump's antics could produce voter turnout this year for the Democrats that could make the difference in swing states and send the monster packing.

But the Democrats have to play this right and not make the same stupid mistakes that got us here.  Sadly, it's quite plausible that they will screw it up.  There are too many comfy, privileged centrists, who are doing very well thank you with the current power structures in society, who clearly haven't yet learned much from 2016.  I've had many discussions with well-meaning but deluded or misguided folks who think Trump can be beaten simply by nominating someone aligned with the elite establishment but just slightly more likeable than Hilary Clinton.  Easy peasy.

Nonsense.  The definition of insanity is doing the same thing over and over and expecting a different result.  I'm done with insanity.

No, Trump's victory in 2016 exposed an anti-establishment anger that was so fierce it was willing to put someone as inappropriate as him in office just to send a message to the elites of America.  They rushed to the polls to elect a guy who would throw a wrench into the machine against a weak and uninspiring Democrat like Clinton.

Nominating a safe and flawed centrist like Joe Biden or Pete Buttigieg this year will likely accomplish the same thing: it will fail to inspire the Democratic base and will fail to boost voter turnout needed to boot Trump from office.  It would suck to turn our backs on better and more progressive candidates, and still lose to Trump.

I'm in full agreement with this great piece by Adam Jentleson about the best way for Democrats to retake the White House.

Whoever the Democrats nominate, that person is going to face an onslaught of hate and lies from Trump, desperate to defend himself from defeat and the possible criminal prosecutions and jail time that could follow.

Democrats need someone they can believe in, who will unite their party, and inspire new voters to get out and vote.  You can't do that with a milquetoast, career politician with a mixed record who embodies the insider establishment of Washington when he's not sounding lost.  You can't do that with a smooth-talking centrist who's changed positions on key issues in this race to appease the billionaire donor class behind closed doors.

Democrats need to nominate someone who is clearly on the side of the little guy or gal.  Someone the average person angry at the establishment can trust to go to bat for them.

For me, Bernie Sanders or Elizabeth Warren best fit that description.

I do worry about Bernie's electability and ability to withstand the onslaught of attacks that will come his way should he get anywhere near the Democratic nomination.  I worry that Sanders's communication skills won't be up to the task of convincing voters he can run the whole country.  Trump would take full advantage and use every corrupt trick in the book to paint Sanders as a "crazy socialist" who will increase your taxes and destroy the economy.  Would it work?  Probably.  I can see Wall Street voting for Trump to stop Bernie.  Sure, Bernie's base would be electrified by his candidacy.  But I've seen too many elections lost by well-meaning socialists who had no idea they were headed for crushing defeat.

I do also worry about Warren's ability to withstand the attacks coming her way too, as well as sexism in America.  But I think she would overcome these, persist and thrive as a candidate.  With the help of a great running mate, I do think Warren will manage to both inspire the base to turn out in droves, but also capture all of the anti-Trump sentiment in ways that Sanders, Biden, Buttigieg and all others could never do.  She may be the best hope we've got.


Posted by Matt Guerin at 6:35 PM
Email ThisBlogThis!Share to TwitterShare to FacebookShare to Pinterest