One aspect of the ongoing Ontario election campaign is unfolding as I expected: most less-than-stellar pollsters are showing the PCs in the lead with the NDP moving into second place.

The only credible pollster out there - Nanos - last produced results on May 6th which showed the PCs ahead with 41% versus 29% for the Liberals and 24% for the NDP.  If Nanos comes out with a new poll soon that also shows the NDP moving into a clear second place, I'll believe this is truly happening.

I will agree that it's clear the Tories are ahead for now but by how much is unclear.   It may indeed be true that the NDP is experiencing a surge here that will continue.

We know the public has major doubts about Doug Ford, which aren't being helped by the recent revelations he attended a big Conservative party fundraiser in late April, right on the eve of the campaign, arrogantly flouting strict new fundraising laws that bar leaders from attending such events.

His bogus explanation that he was "misinformed" about the event, and somehow didn't clue in during it he was surrounded by donors who had paid at least $250 each to hobnob next to him, speaks to his fondness for dishonesty.  He clearly thinks that rules are made for other people to follow, not him.

Not to mention the possibility that stolen information from the 407 was used by Tory operatives  to commit mass fraud in dozens of local nomination races.  The stench of Tory corruption, combined with the fact that this is a party where members like Tanya Granic Allen and other bigots determined Doug Ford to be the best person to lead the party, may now be their party's undoing.   Clearly, this is not a gang that's ready to lead the province.

Considering those doubts about the Tories and the enduring unpopularity of Kathleen Wynne and the Liberals, it's highly plausible that the NDP is moving into second place and has the chance to continue to climb.  Andrea Horwath has been running a strong campaign this time.  I just don't much trust the pollsters putting those numbers out there right now.   They've been too wrong too often in the past for me to just believe these new numbers.

That's why I'm so desperate to get more information from one of the few reliable pollsters out there: what say you, Nik Nanos? 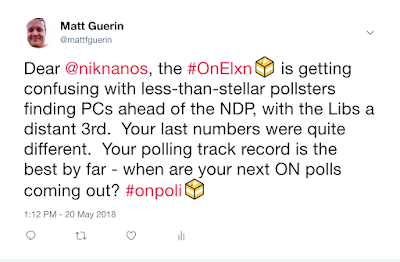 I tweeted him today to find out.  He may not consider me important enough to reply to, but here's hoping he's out in the field as we speak polling Ontarians on their voting intentions.

We've been fooled before by so-called NDP "momentum", like in 2011 when Jack Layton's NDP looked like they'd pull off a miracle.  But in the end, NDP support could only climb to the low 30s, undermining Liberal support in key regions and electing dozens of Conservatives, enough to win a majority.

I cringe to think that's where we're headed again this time in Ontario.
Posted by Matt Guerin at 5:15 PM
Email ThisBlogThis!Share to TwitterShare to FacebookShare to Pinterest