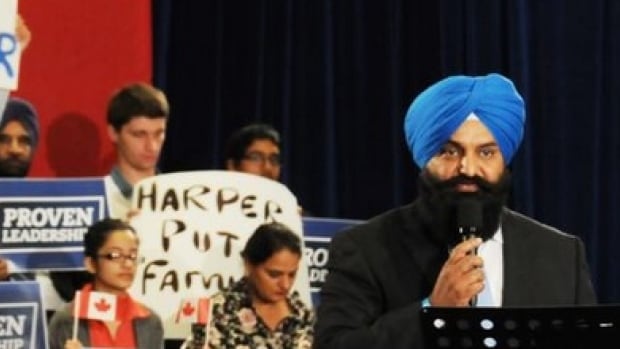 This is gross, especially since this candidate is running in a winnable riding for his party.

"A Conservative candidate (pictured in the blue turban) in suburban Toronto is defending therapies that attempt to turn gays straight, having penned an editorial that referred to homosexuality as "unnatural behaviour" and heterosexuals as "normal."

"Jagdish Grewal, running in Mississauga-Malton, wrote an editorial in the Punjabi Post earlier this year entitled, 'Is it wrong for a homosexual to become a normal person?'

Grewal was responding in his editorial to a new law passed in Ontario this year that banned the discredited and barbaric treatment.

I hope Grewal's dropped right away from the Conservative slate, but I'm not holding my breath.

It would be too late to replace him this late in the election game, after all.

It would be nice if the mainstream media took up this issue and demand Harper defend the practise of "curing" gays espoused by his local candidate.

The Tories have dumped this guy from their ticket.  Although as it's too late to replace him, Grewal's name and party will remain on the ballot in Mississauga-Malton.   However, this all but ensures a Liberal victory in the riding and one less seat for the Conservatives, who won the area in 2011.

It's interesting that this kind of blatant homophobia would see a Tory candidate dumped while other more subtle forms of homophobia, like attacking the new Ontario public school curriculum for even mentioning the existence of LGBT persons, as many federal Conservative candidates across Ontario have done this election campaign, continue to go unpunished.

Clearly, the Conservative Party has miles to go before it grows up.
Posted by Matt Guerin at 6:03 PM
Email ThisBlogThis!Share to TwitterShare to FacebookShare to Pinterest