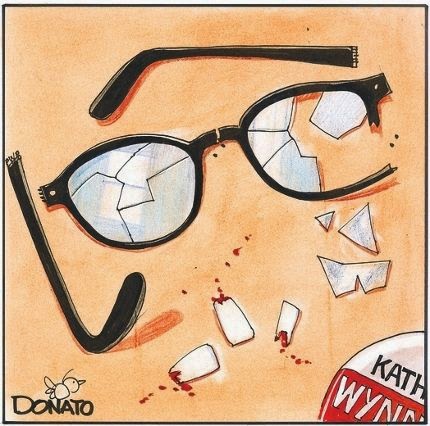 The cheapening of political discourse has hit a new low today courtesy of the Conservative Party's print media wing, the Toronto Sun.

How exactly are we to interpret this distasteful cartoon by Donato?  Clearly the glasses make it clear the cartoonist and paper are depicting the aftermath of some kind of physical attack on Kathleen Wynne.  It's clearly a brutal attack as her bloody teeth are visible.

It's been two days since the debate.  If this was meant to depict Wynne having been "clobbered" during that debate by her opponents, shouldn't it have been printed in Wednesday's paper?   Putting it in the June 6th edition, so Friday's paper, makes you wonder really what the Toronto Sun is trying to say here.

This from the despicable paper that still runs ONLY Sunshine Girls every day, and hasn't published those tiny black & white shots of mostly clothed Sunshine Boys back on page 100 for years and years.

Robin Sears on TVO on Tuesday night used the word "clobbered" to criticize Wynne's performance, before Sears went on to criticize the clothes that Wynne was wearing during the debate.  Perhaps that denigration was the inspiration behind this cartoon?  Who knows?

Toronto Sun writers like Lorrie Goldstein and Christina Blizzard have been campaigning hard through their writings in favour of Tim Hudak this election.  Any pretense for fairness and objectivity went out the window as soon as the election was called.  Will this cartoon give them both a chuckle?   I'm sure they'll defend this disgusting piece of cartooning and dismiss any criticism.

On all levels, this cartoon is gross.   Shame on Donato and the Sun for publishing it.
Posted by Matt Guerin at 1:35 PM
Email ThisBlogThis!Share to TwitterShare to FacebookShare to Pinterest

Political cartoonists have long used physical attacks as a metaphor for rhetorical attacks.

This cartoon is just saying Wynne lost the debate badly.

Want to put your full name to that, Unknown? How do you know it refers specifically to the debate?

Not that my name is relevant to the quality of my arguments, but I have updated the profile setting for this Google account.

I guessed it was about the debate, if not then it would be about the campaign in general.

Glad you stand behind your comments.

She's winning in the campaign in general, according to a poll aggregate.

It's subjective to say it was about the debate. I think it was just a chance for the Sun to revel and make light of an image depicting Wynne (a left-leaning lesbian) being literally beaten to a pulp because they like that sort of thing over there. I'm sure it'll get chuckles with those who also like that sort of thing.

A similar cartoon was used (I think it was Donato"s) to report Lennon's assassination.

Forget punches! This weirdo commie bitch should be shot and pissed on!

The only person who deserves to be pissed on is you, you fucking jerk!

Fucking faggots always trying to push their agenda. Your pariah is going to die, this isn't internet tough guy talk, this is the real deal. Not only will that Orville Redenbaucher look alike get what's coming to her, all queers are on our list. Tru-dope siding with the muzzies, ugly ass dykes stealing from taxpayers, this country has turned into a sesspool of filth and disease. The only cure is a bullet in their face. That's where we come in. The time for change is now. I'm sick of turning on the television and seeing some asshole parent on a talks how with her four year old son wearing a dress saying he's gender challenged. That's the gay communitys' handiwork. Death to all Liberal scum.

I don't care if you publish my comment, as it won't stop me from doing what needs to be done. Polite society will be eternally grateful.

John Samson, hiding behind your information-light Google profile, you're a fucking Nazi pig. And guess what, you've committed crimes with your posts, threatening people with death and violence. I should call the police on your criminal ass! In fact, I think I will initiate a criminal investigation.

Consequences for one's actions apply to everyone, dumb ass, not just people you hate, you bigot!