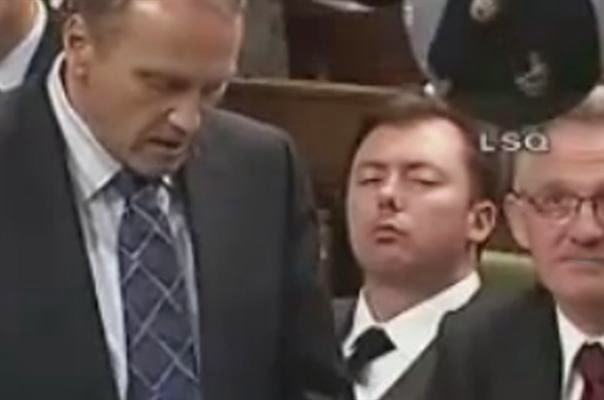 What joyous news this Sunday morning!  The insanity in Calgary West / Signal Hill is finally over!

Rob Anders - the longtime homophobe, social conservative dork, with a penchant for falling asleep in Parliament (see pic on the right) or veterans' committee meetings, the idiot who somehow imagined that Tom Mulcair sped up Jack Layton's death by cancer, and believed that Nelson Mandela was a terrorist - has been vanquished.

The man who was born on April 1st and went on to become a massive Conservative April fools' joke, will not be on the ballot in 2015 in Calgary Signal Hill after his challenger, former Alberta PC cabinet minister Ron Liepert, won the Conservative nomination last night.

Blue conservatives who value a modicum of intelligence, red Tories, blue Liberals, pink Liberals, orange Dippers and green Dippers and everyone else should applaud the decision to remove the biggest boob from the Conservative ticket.  It will make our next Canadian Parliament stronger not to have such an individual tainting it with his presence.

Anders was elected as a Reform MP back in 1997 when nobody of significance wanted such nominations.  He stayed in power for so long because his party protected him from serious challenges until now, despite his dreadful record of service and clear incompetence.  I have to congratulate the Conservative Party for having the guts to open up their nominations this time and allowing this justice to unfold.

In conclusion, I'll second winner Ron Liepert's comment against Anders' supporter Jason Kenney, the ambitious little Conservative MP and alleged Harper replacement frontrunner - who I still think may be a closeted homosexual - and, up until a couple years ago, still claimed to be a virgin: "Mind your own business!"

Sweet justice!  Suck it, so-cons!
Posted by Matt Guerin at 12:41 PM
Email ThisBlogThis!Share to TwitterShare to FacebookShare to Pinterest

I can't believe how long this clown even lasted in politics. I guess it just goes to show you the right winged Nazi mentality that is prevalent in Calgary. Good bye and good riddance you anders you jag off